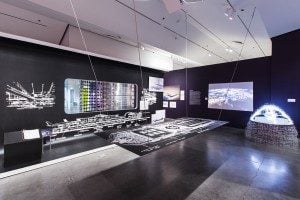 UNR NEWS RELEASE – The Nevada Museum of Art is currently displaying their largest exhibition of 2013 which was originated by University of Nevada, Reno alumnus Colin Robertson.

Robertson received his master’s degree in literature and environment from the English department at the University in 2002. After graduating, he worked as a lecturer in the English department before joining the Museum in 2005. He is currently the Charles N. Mathewson Curator of Education at the Nevada Museum of Art.

In the last three years, Robertson has worked to create the current exhibition, which is called Modernist Maverick: The Architecture of William L. Pereira, which displays images and models of the work by the accomplished American architect.

“He was an important American architect that people don’t know very much about,” Robertson said.

Pereira was born in Chicago, Illinois, and was of Portuguese ancestry. His iconic architectural work includes San Francisco’s Transamerica Tower, the Geisel Library at the University of California, San Diego, the Los Angeles International Airport and the master plan for California’s Irvine Ranch.

The exhibit is receiving attention from around the United States, and, according to Robertson, architectural preservation and architectural design are important to the future of Reno as a city.

“The exhibition is one that shapes peoples’ awareness of architecture,” Robertson said. “Pereira made his mark on many college campuses and even here in Reno, where he created designs for the Greyhound Bus Terminal, the Reno International Airport and more.”

In addition to the exhibit, Robertson edited the exhibition catalogue and wrote and produced a documentary about Pereira which has been airing in Nevada on KNPB since early August and will soon air on PBS in the Los Angeles and Orange County, Calif. areas. Robertson hopes to bring the exhibit to Los Angeles where Pereira’s work was so influential.

The exhibit is on display until Sunday, October 13. More information about the exhibit can be found at nevadaart.org.

Founded in 1874 as Nevada’s land-grant university, the University of Nevada, Reno ranks in the top tier of best national universities. With nearly 19,000 students, the University is driven to contribute a culture of student success, world-improving research and outreach that enhances communities and business. Part of the Nevada System of Higher Education, the University has the system’s largest research program and is home to the state’s medical school. With outreach and education programs in all Nevada counties and home to one of the largest study-abroad consortiums, the University extends across the state and around the world. For more information.