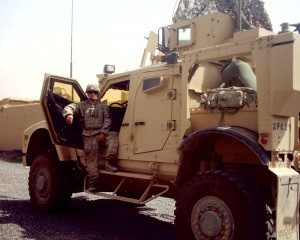 CIRCUS CIRCUS NEWS RELEASE – Lucas Rae was a Specialist in the United States Army where he was awarded a Purple Heart for being wounded in Afghanistan when his M.R.A.P. truck was blown up in 2010. He returns to Circus Circus Reno, his second home after four and a half years of service to our country.

Lucas left Circus Circus Reno in 2008 to join the army where he served in the 82nd Airborne Division as an Airborne Infantryman. He deployed to Afghanistan twice where he was awarded an Army Commendation Medal with Valor and a Purple Heart, among his many awards. The Army Commendation Award was for his heroic actions after the combat vehicle he was driving was hit with an IED (Improvised Explosive Devise). Specialist Rae pulled three of his fellow soldiers out of the truck despite his own back injuries.

Lucas Rae started working for Circus Circus Reno in the Midway when he was only 15-years-old, the same place his father, Bruce, has worked since 1988 as an engineer. He rejoined the Circus Circus team as a Midway Engineer July of this year.

“I have always considered Circus Circus my second home,” said Rae. “This was my first job and after I left the Army it was the only place I considered working.”

Rae moved to Reno when he was eight-years-old and considers himself a native of Nevada. Circus Circus Reno is proud to have him part of the team as he exhibits his fearless hospitality in everything he does.

Circus Circus Reno is an MGM Resorts International® Destination with six unique dining options including local favorites the Steakhouse at Circus, Kokopelli’s Sushi and Dos Geckos Cantina. Enjoy the free circus acts at the midway as well as games for all ages. For more information visit circusreno.com find us on Facebook, friend us on Foursquare, follow us on Twitter, text “CCR” to 86318, download our Mobile app or call 775-329-0711.