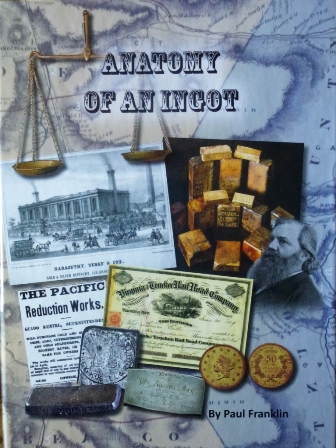 CARSON CITY —Paul Franklin, author of “Anatomy of an Ingot,” will talk about the assaying business in its early years at 6:30 p.m. Sept. 26 at the Nevada State Museum, 600 N. Carson St., Carson City.

An author and researcher who specializes in mining technology, Franklin will focus on the early San Francisco assaying business, conflicts with the U.S. Mint, one of the largest mining stock frauds and the first tin mine to produce in the United States.

He also will sign copies of “Anatomy of an Ingot,” which investigates the lives of three assayers responsible for a significant piece of silver in the 19th century.  The three came together more than 130 years ago to form and assay and metallurgical laboratory that produced a mysterious silver ingot. Their careers intersected with early mining history in California and the Arizona and Nevada territories. The book includes 145 illustrations, original advertisements from period newspapers and directories and some of the earliest maps and photos of the Comstock.

The event is part of the museum’s Frances Humphrey Lecture Series.