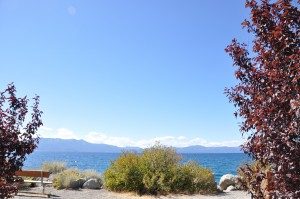 LAKE TAHOE – The Nevada Division of Environmental Protection (NDEP) has entered into agreements with Washoe County, Douglas County and the Nevada Department of Transportation (NDOT) to implement the Lake Tahoe Total Maximum Daily Load (TMDL). The Lake Tahoe TMDL is a science-based effort aimed at restoring the lake’s historic clarity.

The bi-state TMDL effort is based on findings that indicate the majority of fine-sediment and phosphorous pollutants impacting clarity are delivered to the lake via stormwater runoff from developed lands. Accordingly, Nevada and California local governments and State transportation agencies are responsible for controlling stormwater discharges from their respective jurisdictions.

As the agency that oversees and regulates the TMDL within the State of Nevada, NDEP sought to implement the TMDL using a more flexible, collaborative and efficient approach than the issuance of regulatory permits. In consultation with the Nevada urban jurisdictions, NDEP crafted Interlocal Agreements (ILAs) that lay out the roles, commitments and actions of each signatory party to restore the Lake’s clarity. The ILAs oblige the urban jurisdictions to take actions and implement controls to achieve pollutant load reduction milestones established in the TMDL Report. The report and more information about the Lake Tahoe watershed can be found at www.ndep.nv.gov/bwqp/tahoe.htm.

While the term of each ILA is thru August 16, 2016, the agreements are better viewed as “living commitments” that are intended to be updated on a five year cycle in order to restore clarity to historic levels within 65 years.

According to NDEP Administrator, Colleen Cripps, “The TDML’s effort is an excellent example of collaboration. Lake Tahoe’s value as an international recreation destination, a drinking water source and an asset to the local and regional economies is inextricably linked to its extraordinary ecologic and aesthetic value.”