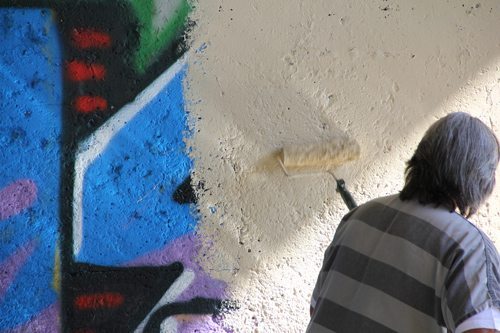 The Washoe County Sheriff’s Office inmate work program saved the county and city of Reno nearly $140,000 in graffiti abatement costs during the fiscal year that ended on June 30.

According to the Sheriff’s Office Work Program Office, inmate work program crews were requested to abate over 26,000 “pieces” of graffiti at 883 sites during Fiscal Year 2012/2013. Of those sites, 577 were in the city of Reno and 306 in Washoe County.

Work program crews also cleaned graffiti at an additional 876 sites identified by the program leader during the course of their day.

“The Sheriff’s Office will continue to support efforts that rid our community of graffiti,” Washoe County Undersheriff Tim Kuzanek said. “Deploying our inmate work crews support this effort to eradicate graffiti, its negative impact and the eyesore it creates.”

Inmate work crews work on graffiti abatement five days a week. Crews are made up of offenders sentenced to the Washoe County Detention Facility.

Inmates assigned to work detail are low level offenders who meet strict eligibility requirements. Every inmate’s record is reviewed for eligibility, limitations, classification level, criminal history and previous jail disciplinary action. This program is supervised by a trained program leader, and inmates can be identified by their striped uniforms worn while working outside the detention facility.

Assignments to work crews are processed in the Sheriff’s Community Work Program Office.

Inmate work crews are tasked with graffiti removal, landscaping, setup and tear down of special events and snow removal for the elderly and/or disabled. For more information, call (775) 785-4244.

Washoe County residents can now report graffiti from their iPhones or iPads by installing the new WCSO app, available for free from the Apple App Store. Graffiti may also be reported online at www.washoesheriff.com

Sheriff’s Office presents graffiti efforts to County Board of Commissioners