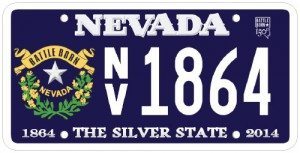 “The 150th license plate is an important part of recognizing our state’s 150th anniversary,” Governor Brian Sandoval said. “The proceeds from the plate will go towards supporting the year-long celebration and I am thrilled that at the end of this month, motorists will be able to show their support for our great state.”