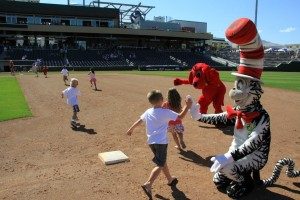 Cat in the Hat will then join the Artown Family Festival and Series Monday night, July 22, in Wingfield Park at 5:00 p.m., to usher in the evening of festivities featuring the Story Pirates. Kids of all ages can meet Cat in the Hat and take pictures with him before the show. KNPB will also have a tent where children can play interactive PBS KIDS games.  Other activities at the Family Festival include face painting, bubbles and coloring.

KNPB Public Broadcasting is seen by 140,000 people weekly in northern Nevada and northeastern California. KNPB provides 3 digital broadcast television channels on channel 5.1, KNPB Create on channel 5.2 and KNPB Vme on channel 5.3. KNPB channels are also available on cable and satellite services. KNPB provides PBS national programming and award winning locally produced KNPB programming in standard and high definition. KNPB.org provides engaging interactive content, including the KNPB video portal at watch.knpb.org that streams all locally produced KNPB content and most PBS national content. KNPB serves students, teachers, parents and caregivers through immersive educational services from KNPB Campus that bring classroom lessons to life. Through the support of local corporations and foundations, as well as individual members, KNPB has been delivering public television and educational services to the communities it serves since 1983. For more information visit knpb.org, or follow KNPB on Twitter and Facebook.