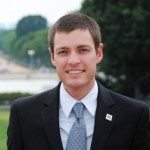 From June 2011 to January of this year, Reeder was the Communications Director/Public Affairs Analyst, for the American Small Business League.  While there, he developed and implemented highly successful media outreach campaigns. He also analyzed policy issues to create content used to persuade organizations and policy makers while helping association members understand how specific polices impact their businesses. Reeder also worked in the media as news and traffic reporter, for Newstalk 1350, KSRO, Santa Rosa, California. Reeder also has experience in grass roots political campaigns working on volunteer recruitment, staff management and fundraising. He is a 2010 graduate from the University of Nevada, Reno earning a Bachelor of Arts in journalism with a minor in political science.

The AGC and its 200-plus member firms represent nearly half of the Washoe County construction jobs. The Nevada Chapter AGC was formed in 1939 by a group of Nevadans intent on replacing the dangerous gravel roads that connected Northern Nevada with modern pavement. They evolved into the modern AGC, whose goal is to use skill, integrity and responsibility to build a better community. AGC membership has been the first to step up to be that good neighbor. These services include: donating labor and materials to local charity groups; donating dollars for the University of Nevada scholarships since 1963, now more than $500,000; supporting the Academy for Career Education, the ACE Charter High School which provides construction education curriculum for Washoe County students.; providing disaster relief with equipment and manpower during times of flood and fire. The Nevada Chapter AGC has been active in national and regional construction issues including job site safety and worker health care, vocational education and recognizing the best in local building.  For more information, log on to www.nevadaagc.org.