UNR student publishes novel based on the Reno area 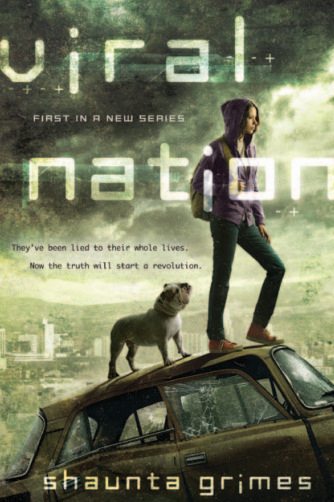 Reno, Nev.- The newest sci-fi book to hit the bookshelves of major retailers titled, Viral Nation is written by local student, Shaunta Grimes. Viral Nation is based on the futuristic, revolutionary themes, such as The Hunger Games, but set in the Reno basin, where Lake Tahoe offers portals to time travel and allusions to the nostalgic Ponderosa Ranch.

Along with the Reno and Tahoe setting of Viral Nation, the book cover art features the main character with the Reno skyline in the backdrop. This is Grimes’s first novel in a series that will be published by the internationally famous publishing company, Penguin Group.

Unlike other young adult sci-fi novels, Grimes creates characters with relatable “special powers.” Inspired by her own nineteen-year-old son’s autism, Grime’s main character, Clover Donovan is a brilliant but autistic sixteen-year-old girl with a beloved service dog. Grimes wants readers to realize autism is not an issue. In fact, the character’s autism becomes her ability to travel in time to save an entire population from a virus that has struck the world.

“I feel like it is really important for people to be able to see themselves in popular culture,” Grimes said.

Viral Nation will be released July 2 the first two chapters are available for free on GoodReads.com.

Shaunta Grimes is an English-writing major at the University of Nevada, Reno and a mother of three. Grimes says she has been a student for a consistency of about 30 years. She said, “I’m one of those who ALMOST gets three or four undergraduate degrees over the course of, oh a couple of decades.” She was a reporter for the Battle Mountain Bugle, and teaches writing classes at TMCC. She is also an avid blogger for the movie and book blog, Story Carnivores and her own blog, ShauntaGrimes.com.