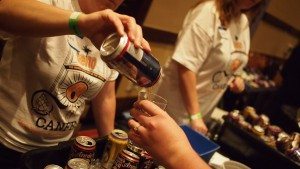 For the third year, CANFEST will offer beer lovers a chance to attend the festival for free by donating a new or used bicycle to Reno’s community bike shop, The Reno Bike Project.

The annual CANFEST Bike Drive will reward those who donate with a complimentary CANFEST ticket. The promotion lasts from June 17 until Aug. 2. To qualify, donators have to be of legal drinking age and request a ticket when dropping off the bicycle.

“Bikes and canned beer have a ton of similarities,” said Constance Aguilar, CANFEST co-producer. “They’re both great for the environment but battle a lot of public misconceptions. The partnership is a perfect way to introduce each concept as progressive and positive things to the community.”

CANFEST VIP tickets will also be awarded to those who purchase a Reno Bike Project Commuter Membership. The CANFEST VIP Membership package is a $160 value offered at $100 during the CANFEST Bike Drive campaign.

CANFEST, Reno’s original international canned beer festival, has supported the Reno Bike Project’s efforts to educate the public on the benefits and safety of riding a bike since 2011. The CANFEST Bike Drive has received strong community support since launching, earning the Reno Bike Project more than 200 bicycles since its debut.

“This is our favorite event and our only bike drive of the year,” said Jeff Mitchell RBP program manager. “CANFEST allows us to combine our three biggest loves: giving back to the community, bikes and beer. All bikes donated during the bike drive will be recycled or repurposed and given a new home.”

Portions of proceeds from CANFEST are given back to the Reno Bike Project to help support their efforts. The CANFEST Bike Drive was created to help the shop gather extra bikes to support their shop during the winter months.

To participate in the CANFEST Bike Drive, drop off new or used bicycles to the Reno Bike Project at 541 E 4th St. Call (775) 323-4488 or visit www.renobikeproject.com for shop hours and directions.

CANFEST will take place on Aug. 24 inside the Peppermill Resort Hotel and feature canned beers from around the world. CANFEST is presented by Mammoth Brewing Company and The Abbi Agency. For more information visit www.canfestbeer.com