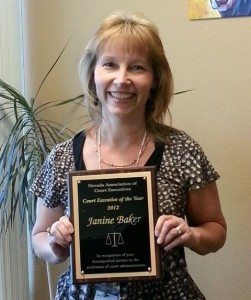 Janine Baker, the administrator at Sparks Justice Court, was recently selected by the Nevada Association of Court Executives (NACE) as its 2012 Executive of the Year.

“I know I speak for all administrators and senior court staff throughout the state when I say Janine earned this award and no one is more deserving,” said Steve Tuttle, vice president of NACE. “Her steadfast efforts in relocating her court, implementing a new case management system and maintaining a balanced, yet declining, budget over the past several years are great achievements. To successfully do all three in a two or three year period is noteworthy.”

Tuttle also said the Board received many nominations for the award and Janine was clearly one of the front- runners. “We received four separate nominations for her alone; all citing three major accomplishments.”

Other contributing factors involved in the final decision included Baker’s participation with court process improvement committees at both the local and state levels.

Baker is a graduate of Sparks High School and began her career with the Sparks Justice Court as chief civil clerk.

“I am very honored to have received this award as I hold so many of the past recipients in the highest regard,” said Baker. “In my 25-plus years with the court, I’ve been through two courthouse moves and two major case management system implementations, but I’ve only worked under four judges.”

Sparks Justice Court to close on Mondays due to budget...