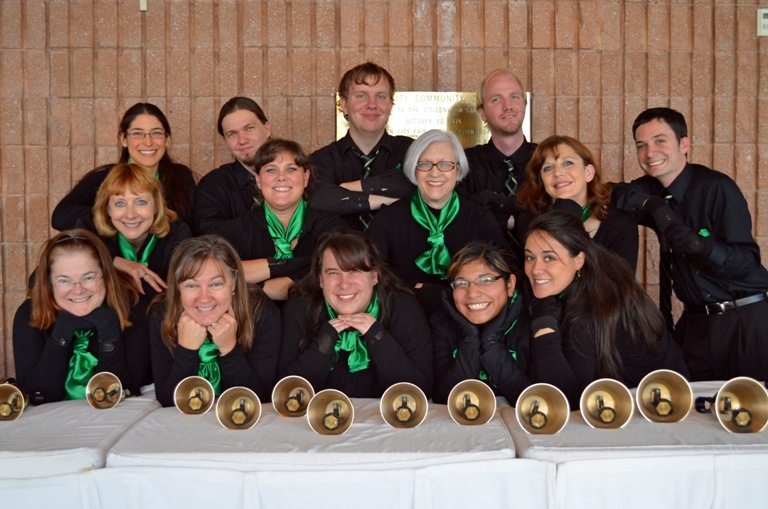 TINTABULATIONS NEWS RELEASE – Tintabulations, a community handbell ensemble from Reno, Nevada, has been chosen to be the first group from Nevada to perform the opening concert at the Handbell National Seminar this July, and they are presenting a series of concerts around the Reno area in preparation and to raise money.

The concert, entitled “Journeys,” explores not only the journey music can take listeners on, but also the journey the group has taken to be able to receive the honor  of performing at National Seminar.  Classical baroque, modern jazz, and quirky Disney tunes are all part of the concert, as well as impressive original works for bells written by some of the nation’s foremost handbell composers. Performing on 120 bells and chimes, the 14 talented musician that comprise Tintabulations prove that bell ringing can be entertaining year round and not just at the holiday season.

Since its founding in 1996, Tintabulations Handbell Ensemble (“Tintab” as the members like to refer to it) has been pushing the boundaries of traditional handbell performance and entertaining audiences around the west coast.  Barb Walsh, the group’s director and a local music teacher, started Tintab with a handful of ambitious high school students.  The group has since grown to include University of Nevada students, music teachers from as far away as Lake Tahoe, working professionals from around the area, and a librarian from Carson City.  Tintab has performed with The Reno Pops and Reno Philharmonic, as well as giving concerts throughout Nevada, California, Oregon, Hawaii, and even Disneyland.

National Seminar is a yearly event hosted by Handbell Musicians of America.  Each year ringers from around the country come together for five days of handbell instruction and performances.  This summer Tintabulations will be joining Bells of the Cascade from Oregon, Timbre from Southern California, and Kirku from Japan as the headlining concerts during the festival.  This year’s National Seminar will take place in Portland, Oregon, from July 24 to July 28.

For more information and the concert schedule, visit Tintabulations.com.