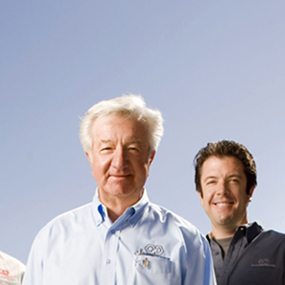 Q&D NEWS — Founded in Reno, Nev. in 1964, Q&D Construction has navigated the boom and bust cycle of the northern Nevada economy for 49 years with the company’s Chairman and President Norm Dianda at the helm. As the award-winning contractor heads toward its 50th year in the market, it announces the promotion of several key employees who are set to take over the day-to-day operations of the company. Both Chris and Mike Dianda take a step up from roles as Executive Vice Presidents to become Managing Directors, while Lance Semenko, current Senior Vice President-Engineering is now Chief Operating Officer (COO).

As COO, Semenko is responsible for overseeing the company’s daily operations and reports directly to Chris and Mike Dianda as Managing Directors. Norm Dianda continues as Chairman of the Board of Directors.

“After 50 years in the business and watching my two sons, along with Lance, flourish together with the company, it’s time for me to take a step back and let them do all of the things I’ve taught them to do,” said Norm Dianda of his recent decision. “There is no other reason for this change in operations; I simply want to enjoy more personal time with my family and allow these talented gentlemen to continue the legacy of what Q&D represents: quality, integrity, service and community.”

Q&D Construction is a 12-time winner of the “Contractor of the Year” award by the Nevada Chapter of the Associated General Contractors. It specializes in commercial building such as projects both small and large for Southwest Airlines across the nation, and Scheels Stores in Utah and Montana; general engineering including bridge construction and reconstruction, and commercial recycling; public and private infrastructure such as northern Nevada’s Prospector Pipeline and the Moana Lane Widening and Reconstruction Project; and custom contracting including the Ritz-Carlton Lake Tahoe, Tranquility at Lake Tahoe and the Assumption Church in Truckee, Calif. Q&D is also heavily involved in the Contractors Auxiliary, which provides emergency contractor services to victims of natural and other disasters.

For more information on Q&D Construction, visit www.QDConstruction.com or call 775-786-2677.