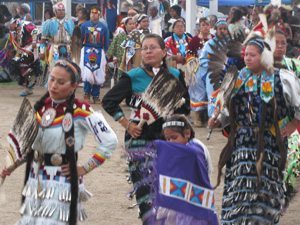 SACRED VISIONS POW WOW NEWS RELEASE PYRAMID LAKE – July 19 through 21, the Pyramid Lake Paiute Tribe hosts its 5th annual Sacred Visions competition pow wow. The event is open to the public, and admission is free. Traditional Paiute dancing is featured alongside competition dancing, as well as native arts and crafts. The host drum, The Wild Boyz, come from the Santo Domingo Pueblo in New Mexico. The event begins with the grand entry on Friday at 7:00 p.m., continues Saturday from 12:00 p.m. until 7:00 p.m., and Sunday reconvenes at Noon. More information can be found at www.sacredvisionspowwow.com, or email [email protected]