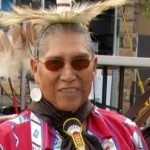 NEVADA ARTS COUNCIL NEWS RELEASE NIXON – Storyteller and Pyramid Lake Paiute elder Ralph Burns has been named a recipient of the National Endowment for the Arts National Heritage Fellowship award, one of only nine in the United States for 2013, it was announced June 4. Burns will travel to Washington, DC, to receive his award at the Library of Congress Sept. 25. The nation’s highest honor in the folk and traditional arts, the NEA Heritage Fellowships recognize folk and traditional artists for their artistic excellence and efforts to conserve America’s culture for future generations. The fellowships include an award of $25,000.

The 2013 honorees join the ranks of previous heritage fellows, including bluesman B.B. King, Cajun fiddler and composer Michael Doucet, cowboy poet Wally McRae, gospel and soul singer Mavis Staples, and bluegrass musician Bill Monroe. Fellowship recipients are nominated by the public, often by members of their own communities and then judged by a panel of experts in folk and traditional arts on the basis of their continuing artistic accomplishments and contributions as practitioners and teachers. This year the panel reviewed 169 nominations for the nine fellowships. The ratio of winners to nominees indicates the select nature of this national honor.

Jeanne Harrah Johnson, adjunct faculty at the University of Nevada, Reno, and the Nevada Arts Council nominated the revered storyteller and native-language specialist. Burns grew up on the Pyramid Lake Paiute reservation in Nixon, where he learned the Numu, Northern Paiute, language and traditional stories from his family and community members. After serving in the 1st Cavalry Division during the Vietnam War and years of working in California, Burns returned home to the reservation to devote his life to spearheading native-language revival among the Northern Paiute.

At the Pyramid Lake Paiute Museum and Cultural Center, Burns is the cultural resource specialist and supports the Paiute language program. Recipient of the 2011 Nevada Heritage Award, Burns is an accomplished traditional dancer who frequently leads the sacred circle powwow dances and has instructed groups at the Pyramid Lake Reservation and Reno-Sparks Indian Colony, said Susan Boskoff, executive director of the Arts Council.

For more than two decades, he has taught the Numu language to tribal students, local high school students, and community members, and developed a language curriculum to teach both Native American and non-Native American people. “Without his efforts, these traditional arts of the Paiute people and other Indian people would be lost,” said Sherry Rupert, executive director of the Nevada Indian Commission.

Burns was honored for work throughout the region, presenting the history, culture, and traditional stories of the northern Paiutes to his and other tribal communities and non-Native American audiences. He uses storytelling as an integral tool when teaching the language, since traditionally the Paiute language was passed on orally, according to the NEA announcement.

Burns has performed blessings and offered Paiute tribal stories at both state and federal ceremonies, including the 2011 Nevada State Governor’s Inauguration and the dedication of the Sarah Winnemucca statue at the U.S. Capitol in Washington, D.C. His stories of animals, land and people are part of the exhibits in the Nevada State Museum in Carson City. Burns received the Nevada Heritage Award in 2011 for his contributions to the many people and cultures of the state.