Father and son: Running the RTO 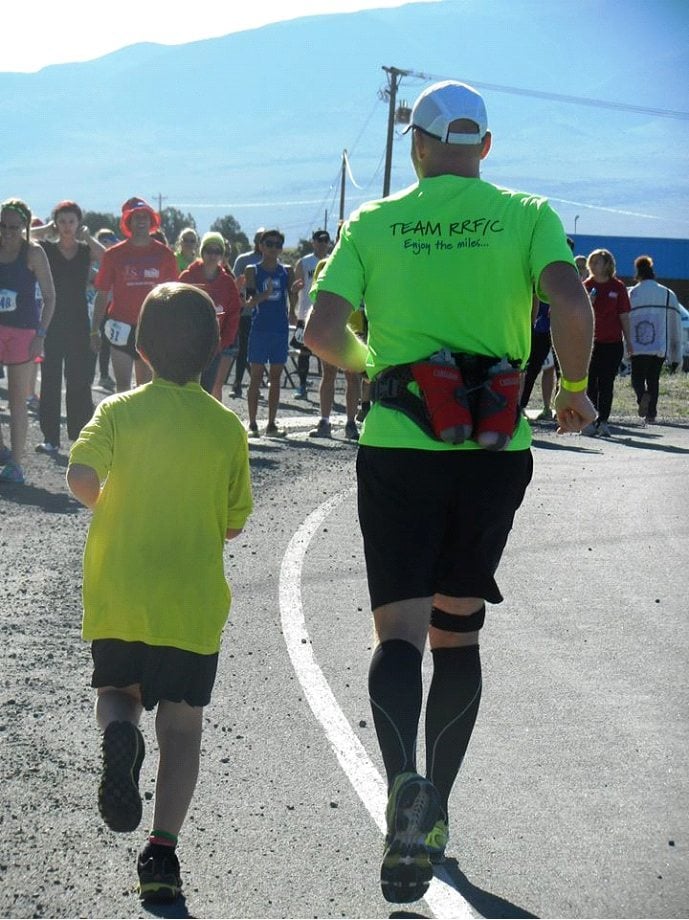 Up the short hill, then a right turn, rounded the corner and the end came into sight. Seemed like a hundred people waiting and cheering. I looked at him and asked him to take my hand. The cheers got louder, we quickened the pace, and then we were done. I picked him up off his feet and swung him around. I couldn’t believe what we had just done.

For me, it was a special end to a 31 mile RTO adventure with a wonderful six person ultra-team. For Ben, it was his longest run ever at 8.5 miles and the completion of three legs of the Odyssey taking him 12.5 miles during the race. For us both, it was a special time as runners, and as father and son.

This wasn’t the first time that Ben had run in the Odyssey. Last year we had a great time together running leg 26. This year I was fortunate to find 5 other like-minded runners crazy enough to take on an ultra-challenge, and Ben was right there looking to be part of the team. We mapped things out and decided that he could run one, maybe two sections of my legs and get to tag along for the ride in the car with the team.

And that is how things played out; until I passed the exchange point where Ben was to stop on the exchange between Legs 27 and 28. I said goodbye, gave him a hug, said I was proud of him and proceeded to pull away; he’d done is job and run 3 miles that day, and 4 miles the day before. And then he started running again, caught me, and asked if he could run some more. I smiled.

We quickly moved out from the rolling hills of northeast Carson onto Highway 50 and started up the hill, and Ben just kept on going. We weren’t moving fast. Other runners passed us. But every one of them had a smile on their face, and words of encouragement. Team vehicles were shouting and honking as they passed on the other side of the freeway. A long climb, and then we plateaued. We encountered vans that had pulled to the side offering high fives as we ran by. I continually checked in, “Are you okay?” “Yes.”

It’s a long 2 mile slog to the turnoff to the industrial park that serves as the exchange to Leg 30. I was tired, aching, and ready to stop; so was he. We kept moving forward. We made the first of several turns, and saw more people. Another turn, then one more. And then the finish, the cheers, the accomplishment, and the reward. I won’t forget this day, neither of us will.

Ben is 10 years old and he is my running partner and my son. Thank you Reno Running and Fitness and the Reno Tahoe Odyssey for this experience.