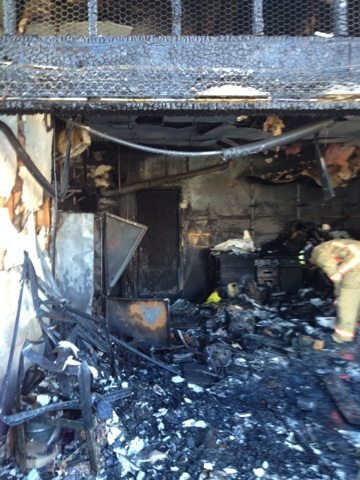 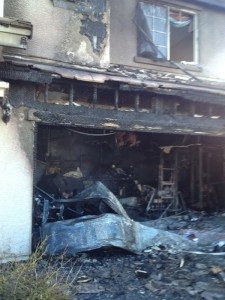 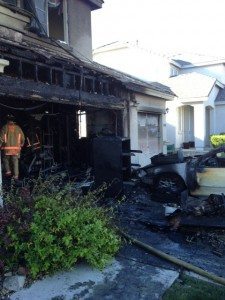 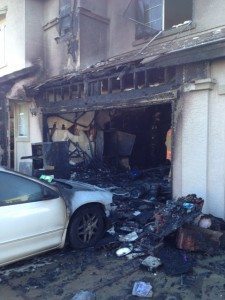 At 5:42 a.m. today, Reno firefighters responded to a structure fire at a single-family residence on Fort Morgan Way.

“The residents woke up to their smoke alarms going off and quickly evacuated the home,” advised Reno Battalion Chief Steve Leighton. “Working smoke alarms can be the difference between life and death. They are definitely credited for allowing this family to able to evacuate safely and without injury.”

The Reno Fire Department chaplain and the American Red Cross are assisting with finding alternative living arrangements for the family (two adults, three children and one dog). No injuries were reported.

The fire started in the garage of the two-story wood frame home. Firefighters were able to contain the fire to the garage. Heavy fire damage was limited to the garage along with damage to two vehicles and some smoke damage to parts of the residence. The cause of the fire is under investigation.

Responding to the structure fire were four structure engines, one ladder truck, one air support unit, one safety officer, one fire investigator, the fire department chaplain and one battalion chief. NV Energy assisted by helping fire crews with shutting off gas and electric services.

The Reno Fire Department advises smoke alarms that are properly installed and maintained provide an early warning signal which could allow everyone in the home to safely escape. While current code requires a smoke alarm in every sleeping area, the minimum protection for homes is one smoke alarm outside of each sleeping room, and one on each level of the home including the basement.

Residents should use batteries recommended by the manufacturer and make sure they are firmly connected to the smoke alarm contacts. Remember if a smoke alarm starts making “chirping” noise, it’s a signal battery levels are low and need to be replaced. Dusting smoke detector surfaces and vacuuming the air vents regularly will keep dust and spider webs from fouling detection elements or causing false alarms. All smoke alarms should be tested monthly and new batteries should be installed at least once a year.