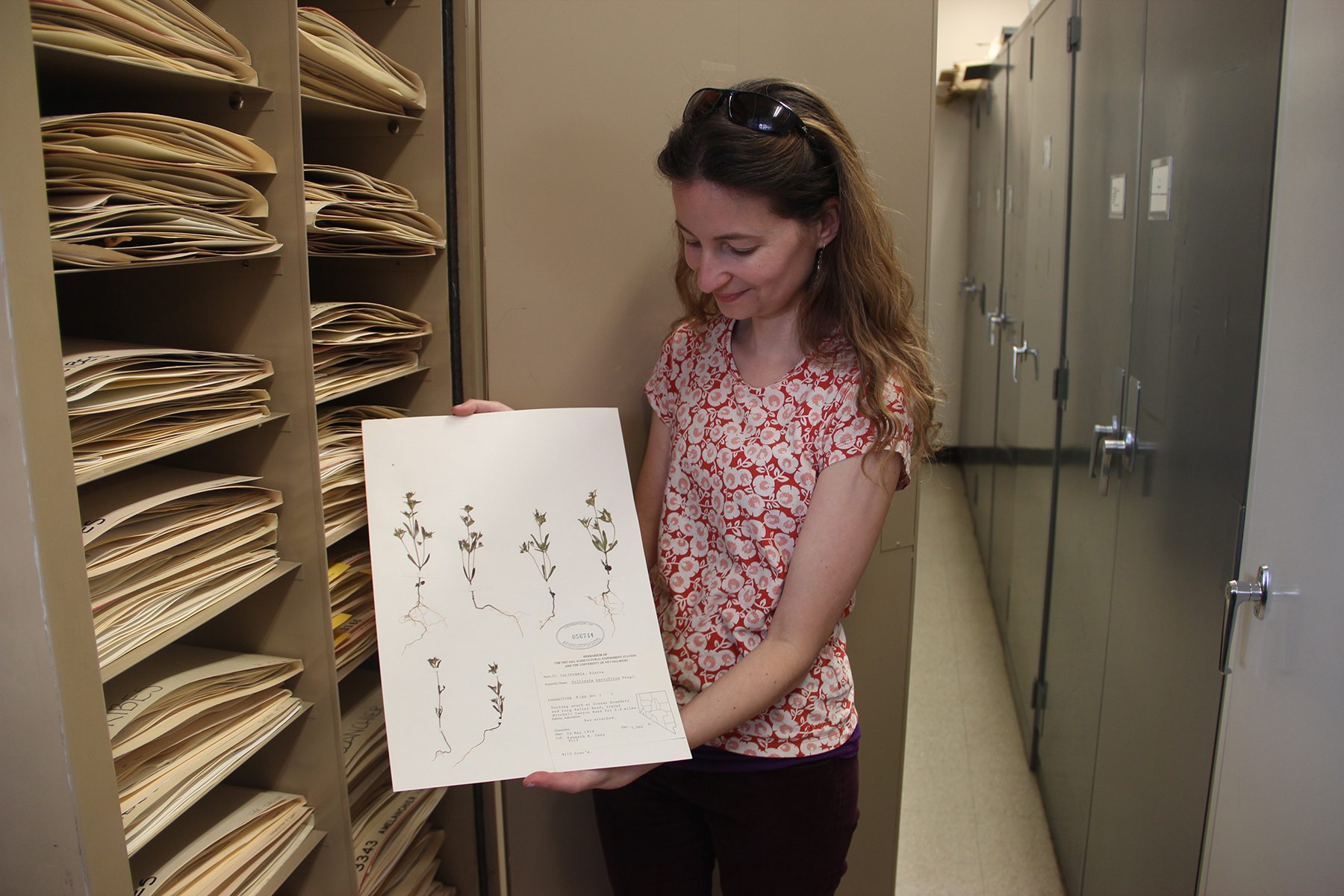 UNR NEWS — Plants are shrinking in the Great Basin of Nevada, and warming climate could be the culprit, according to a paper published in the renowned science journal Global Change Biology based on research conducted by University of Nevada, Reno plant ecologist Beth Leger.

“I used the extensive plant collections in the University of Nevada, Reno herbarium to ask how plants are responding to climate change over the last century,” Leger said. “I found that plants are shrinking over time – a result that has been seen in vertebrates, but almost not investigated at all in plants – which has implications for primary productivity and turns the old idea that ‘bigger is always better’ on it’s head.”

Leger, an associate professor of plant ecology in the department of Natural Resources and Environmental Sciences, took into account air temperature minimums and maximums, sea surface temperatures and precipitation beginning in the year each specimen was collected. She used climate data from PRISM, recognized world-wide as having the highest-quality spatial climate data sets currently available.

“I asked whether warming trends in the Great Basin have affected plant size by measuring specimens preserved on herbarium sheets collected between 1893 and 2011,” she said. “We spent several hundred hours in the collection.”

Leger and four undergraduate students examined, measured and analyzed more than 1,900 samples to determine if climate affected plant height, leaf size and flower number, and whether those changes in climate resulted in decreasing sizes for seven annual flowering plant species.

Of the thousands of specimens to choose from, Leger and her students chose seven that had samples and records reaching back to the late 19th century.

The University’s herbarium, a part of the Nevada Agricultural Experiment Station, was established in 1888. By 1890, the staff had collected samples for 2,000 Northern Nevada species. Today the herbarium, under the supervision of botanist

Arnold (Jerry) Tiehm, houses more than 90,000 samples from throughout the Great Basin, many from the original collections of the 1890s.

Scientists from around the world use the collection for a variety of research topics.

“Having a resource like the herbarium, with specimens collected and preserved for more than 100 years, is incredible,” Leger said. “The foresight of those early botanists has really paid off for science, and the resulting benefits to our communities throughout Nevada are valuable as we use the data to inform our decisions.”

The Global Change Biology article “Annual Plants Change in Size Over a Century of Observations” can be viewed at http://onlinelibrary.wiley.com/doi/10.1111/gcb.12208/full.

The herbariums database, maintained by University Libraries, currently contains about 20,000 of the approximately 90,000 specimens housed in the Herbarium. The herbarium database can be found at http://contentdm.library.unr.edu/cdm4/browse.php?CISOROOT=%2Fherb.