Bowers Mansion opens for tours May 18 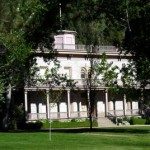 WASHOE COUNTY NEWS — The recently renovated historic Bowers Mansion in Washoe Valley will re-open for tours this weekend for the first time since 2009. Two $100,000 grants from the State Historic Preservation Office Commission on Cultural Affairs were received for the seismic and structural rehabilitation of the mansion. In addition, the Mansion’s spring-fed swimming pool will re-open June 8. The William N. Pennington Foundation donated $150,000 to renovate the Bowers Pool, which has also been closed since 2009.

There will be a series of programs entitled “Programs on the Porch” at 7 p.m. Friday evenings May 31-June 28. Washoe County Parks Ranger Jerry Buzzard will host the programs, which will include music and guest speakers and are free with donations accepted.

Bowers Mansion offers a rare glimpse into Nevada life during the 1860s. The mansion was built in 1864 by Comstock millionaires L.S. “Sandy” Bowers and his wife Allison Oram. Their story reflects the rags-to-riches-to-rags tales so commonly associated with Nevada’s first silver boom. Along with the history, visitors are sure to enjoy the beauty of the mansion’s sixteen rooms, each elegantly furnished with Victorian antiques.