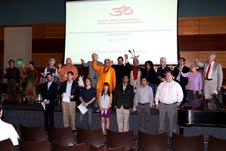 Unique, one of a kind baccalaureate service in the world, was held at University of Nevada-Reno (UNR) on April 21 evening.

USOH President Rajan Zed, who recited Gayatri Mantra (the most sacred mantra of Hinduism from oldest scripture Rig-Veda) in Sanskrit and audience repeated after him, said on the occasion that the purpose of this baccalaureate service was to root the graduating class in divine spiritual tradition so that they had a spiritually meaningful life in addition to material success.

Washoe County had issued a special Resolution to mark the significance of First Annual Hindu Baccalaureate Service of UNR. Baccalaureate service basically means service where a sermon is delivered to the graduating class. In use since at least the eighth century, origins of the baccalaureate service point to an Oxford University statute of 1432, which required each bachelor to deliver a sermon in Latin as part of the academic exercise.

UNR, the flagship institution of the state established in 1874, which has over 18,000 students, is known for helping to create the world’s most accurate atomic clock, earthquake expertise, highly ranked MBA program, several Pulitzer Prize winners and for “study of the behavior of matter at extremely high temperatures and densities”.  About half-a-dozen Hollywood films were shot here and it is home to one of the largest earthquake-simulation labs. Marc A. Johnson is the President.

Hinduism, oldest and third largest religion of the world, has about one billion adherents and moksh (liberation) is its ultimate goal. There are about three million Hindus in USA.

Details of the picture attached:

Religious representatives belonging to different traditions blessing some of the graduating students at the Baccalaureate Service.