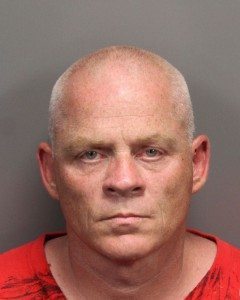 RPD NEWS — On yesterday’s date, John Wehr age 45, a target of the Northern Nevada Repeat Offender Program was sentenced to 5-20 years in the Nevada State Prison by the Honorable Judge Lidia S. Stiglich.  The state was represented by Deputy District Attorney Peg Samples.  Wehr was adjudicated as a Habitual Criminal by the court after being presented with 3 prior certified felony convictions.  He was found guilty by a Jury on January 28, 2013, of one count of Burglary.

On May 28, 2012, in the early morning hours, the Peerless Cleaners on North Hills Road was burglarized.  A surveillance video clearly showed Wehr breaking the window and entering the business.  Wehr had some distinctive clothing and tattoos that helped detectives to identify him.  On June 1, 2012 the Street Enforcement Team located and arrested Wehr.  Detectives from the Repeat Offender Program and the Sparks Police Department were able to collect substantial evidence used in the trial.  Wehr has a criminal history spanning 26 years including 10 Felony convictions and multiple misdemeanor convictions.

The Northern Nevada Repeat Offender Program is a regional unit comprised of detectives from the Reno and Sparks Police Departments.