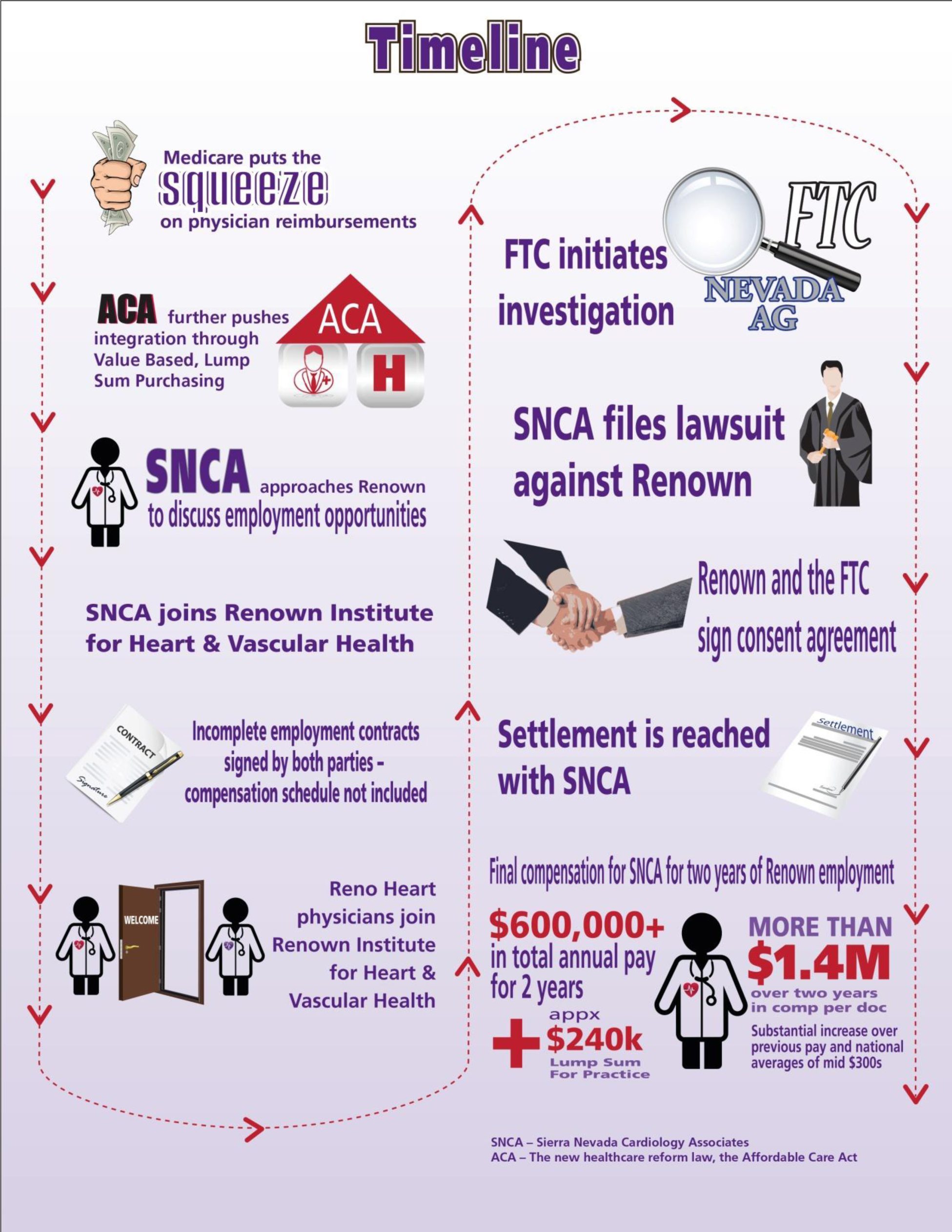 RENOWN NEWS — Renown Health today announced the departure of four executives and other changes following an independent review of issues related to its acquisition of Sierra Nevada Cardiology Associates (SNCA). Renown’s Board of Directors engaged law firm Bryan Cave to conduct a comprehensive review of the SNCA matter as well as related investigations by the Federal Trade Commission and the State of Nevada that ultimately were settled.

“There is no question that things did not go as planned,” said Renown Health board chairman David C. Line, “and for that we are sincerely sorry. As an organization, we have been committed to taking whatever steps are necessary to make sure that our policies, procedures and communications are as world-class as the health care we provide. If the execution of the SNCA transaction had been as solid as our intentions, none of this would have occurred.”

To ensure continuity of leadership while a national search for a chief executive is under way, the board has named healthcare industry veteran Donald C. Sibery as interim Chief Executive Officer. Sibery brings to Renown more than 35 years of experience as a health system chief executive and chief operating officer. Line was also appointed to serve as Renown’s president on a temporary basis to lend additional support to Sibery and the senior leadership team. Sheryl Feutz-Harter was appointed to the interim legal counsel role.

In announcing the changes, Line emphasized the depth of Renown’s senior leaders, who average 24 years in healthcare.

“We couldn’t ask for a more capable and dedicated team,” Line said.

To lend additional national perspective on emerging developments and best practices in healthcare, the board has elected as its newest member Michael Peterson, who most recently served as a top executive at Stanford Hospital and Clinics in Palo Alto, Calif., including eight years as its chief operating officer.

A Physician Collaboration Committee also will be established and be chaired by board member and physician Lesley Smith. Additional details will be announced at a later date after Dr. Smith and others have discussed how best to structure the initiative to enhance trust and facilitate the sharing of ideas and concerns between the physician community and Renown.

“Renown remains committed to communicating to the community about these and other important issues and we will keep our key stakeholders, including physicians and the community up-to-speed on our progress,‖ Line added.
Line emphasized that the region’s heart leader will continue to build and expand services for the northern Nevada community. ―Renown’s vision for the heart institute remains intact: to provide the region’s premier physicians, premier heart services and premier technologies all in one seamless integrated network.”

Seventeen physicians remain with Renown’s Institute for Heart and Vascular Health and most of those are from the former Reno Heart Physician group.

Even in acknowledging that the changes are notable, Line encouraged keeping the recent situation in perspective.

“While we were dealing with this situation, each and every one the 5,000 people that make up the Renown family were busy doing what is most important and what we do best – caring for our community. In just the last 30 days, they helped bring more than 300 new babies into the world, performed 2,000 surgeries, treated 53,000 patients in our ERs, Urgent Care Centers and physician offices and admitted 2,500 patients to the hospital, including some very special Marines injured in the Hawthorne tragedy.

“We want our employees and our patients to know that we will emerge from this chapter stronger and better than ever.”

Additional background, including clarification of certain inaccuracies reported by the media and other sources, is available at: www.heart-of-the-matter.org

About Renown Health
Renown Health is Reno’s only locally owned, not–for–profit integrated healthcare network. As the region’s largest private employer with a nearly 5,000 member workforce, Renown provides more services than all other local healthcare networks combined. It is comprised of three acute care hospitals plus a rehabilitation hospital, a skilled nursing facility, the largest medical group and urgent care network and the region’s largest and only locally owned not-for-profit insurance company, Hometown Health. Renown also carries a long tradition of being the first in the region to successfully perform the most advanced procedures.

Several key facts you may not know about elements on the timeline:
Re: National trends in physician employment

In general, there is a notable trend away from physician private practice and into hospital employment. Cardiology has been in the forefront of this trend in part due to declining reimbursements and their impact on practice revenues and physician income. It is important to note that this trend isn’t going to change, it will only grow under the Affordable Care Act (ACA). It was against this backdrop that Renown developed its vision to build a world class Institute for Heart and Vascular Health that would increase the scope and breadth of services available to the northern Nevada community. We would come together to provide the region’s premier physicians, premier services and premier technologies—all in one seamless and integrated network.

Re: Renown’s intention with the purchase of Reno Heart Physicians
The group didn’t want to be ―split up‖ and wanted to be a part of the vision of Renown’s Institute for Heart and Vascular Health. Renown’s motivation in acquiring the group was to keep physicians in our community.

Re: SNCA Lawsuit
The lawyers engaged by Renown to execute the transaction on its behalf ―missed‖ that critical compensation schedules were not attached when contracts were signed.

Re: Program Size
Heart surgery is one example where size of the program can make a difference in the quality of care. It is commonly understood (a position supported by the Association of Thoracic Surgeons) that it takes a minimum of 200 surgeries per year for a surgeon and a hospital to produce optimal open heart surgery results and retain ideal competency levels. In smaller communities, where the total number of surgeries needed is under 500, multiple programs are not always in the best interest of the community.

A consolidation of a single physician specialty is not always bad. Size can lead to better programs and improved quality.

What does it take to cover an ER 24/7?
It takes a large group of physicians who can cover both an outpatient practice and full-time emergency room service.

Re: the compensation the physicians received
SNCA physicians received $1.4 million each, on average, for the two years of Renown employment. This includes the one time sum each physician was paid for their practice, and approximately $600,000 in annual compensation in each of the two years. This is well above national average salaries for hospital employed cardiologists, and well above what they earned prior to the acquisition by Renown.