On tour from New York, “Abraham Lincoln: A Man of His Time, A Man for All Times” appears at Nevada Historical Society 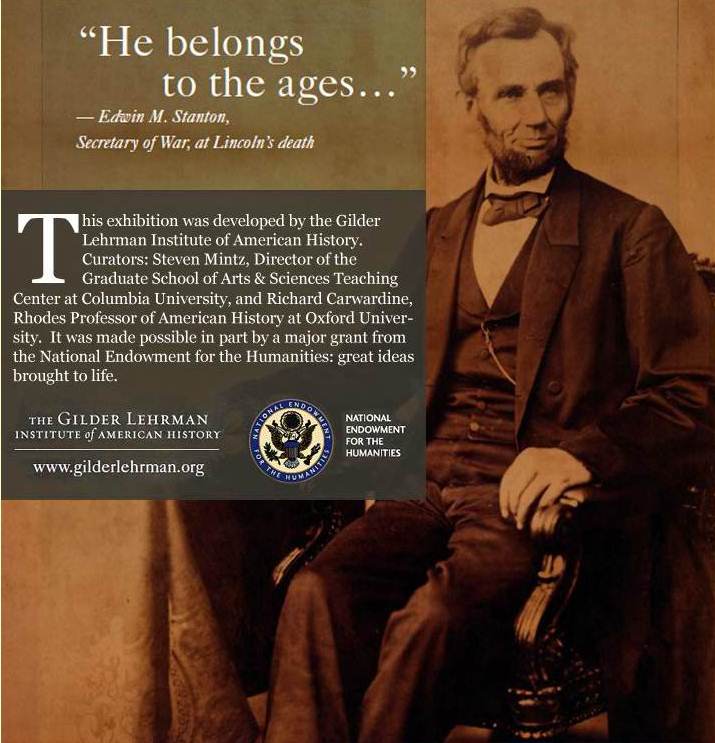 NEVADA HISTORICAL SOCIETY NEWS RELEASE – Civil liberties, constitutional rights, race and the limits of power—Abraham Lincoln’s leadership was challenged by many of the issues that face the U.S. today. A new exhibit debuting April 19 at the Nevada Historical Society in Reno explores the impacts of the nation’s 16th president, a compelling force as Nevada entered statehood in 1864.

The traveling exhibition, “Abraham Lincoln: A Man of His Time, A Man for All Times,” comes to the Historical Society on loan from the Gilder Lehrman Institute of American History in New York. It includes visuals of handwritten letters, an ad about runaway slaves, family portraits and war imagery from Currier and Ives. It explores the life of the president. Raised on the Kentucky and Indiana frontiers, and formed by his experiences as a lawyer in Illinois, Lincoln advanced the idea of the United States as a single, unified nation, and he set an agenda for inclusive democracy.

“We were admitted to the union under his authority and we will take a look at that this year as we begin to celebrate the 150th anniversary of Nevada statehood,” said Shery Hayes-Zorn, acting director of the society, Nevada’s oldest cultural institution. “Hosting this show is a thrill for us. Gilder Lehrman is a wonderfully supportive institution with so much to share about Lincoln.”

To kick off the display, guest lecturer Robert Nylen, curator of history for the Nevada State Museum in Carson City will present a program Friday, April 19 at 6:15 p.m. The Historical Society will host a free reception that evening from 5:30 p.m. to 7:00 p.m. Nylen will focus on Lincoln’s first inaugural address and the Pony Express. He will look at the amazing story of how Lincoln famous inaugural address reached Nevada in record time in 1861.

“Even at the fastest it would still take eight to 10 days before Lincoln’s words would appear in local papers. The Pony Express officials realizing the importance of the message put in place a plan to ensure that Lincoln’s address would move as fast as possible across its route,” Nylen said. “As Lincoln’s speech was being given, his words were already being transmitted by telegraph from Washington, D.C., to the end of the telegraph line in Nebraska.”

The Nevada Historical Society is at 1650 N. Virginia Street in Reno. The exhibit runs through June 3, Zorn said. For more information, contact the museum at 775-688-1190.