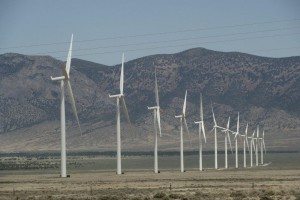 BLM NEWS — In support of the Administration’s strategy to develop environmentally responsible renewable energy on public lands, the Bureau of Land Management (BLM) is issuing a regulation that will facilitate right-of-way applications for lands with wind and solar energy development potential.

The Final Rule to be published in tomorrow’s Federal Register will allow the BLM, when necessary for the orderly administration of the public lands, to temporarily segregate lands in a wind or solar energy right-of-way application from the location of mining claims or other land appropriations.

Under the Federal Land Policy and Management Act of 1976, the BLM is charged with managing the public lands for multiple uses. Under existing regulations, lands proposed for exchange or sale can be closed to the filing of mining claims. However, lands included in a proposed right-of-way remain open to the location and entry of mining claims while the BLM is considering the application.

The Final Rule will revise the regulations to provide for the segregation of lands to facilitate the processing of solar and wind energy right-of-way applications.

The temporary rules published in April 2011 have helped resolve such conflicts, since they granted the BLM authority to temporarily remove lands included in a renewable energy right-of-way application and lands offered for wind or solar energy lease from land appropriations like mining claims. By temporarily segregating lands covered by pending wind or solar right-of-way applications, or lands identified as potential renewable energy leasing areas, the BLM can help ensure that new resource conflicts will not arise with respect to mining claims.

A segregation would be effective for two years and could be extended for an additional two years if the appropriate BLM State Director determines that an extension is necessary for the orderly administration of the public lands.

The text of the Final Rule is available online here.