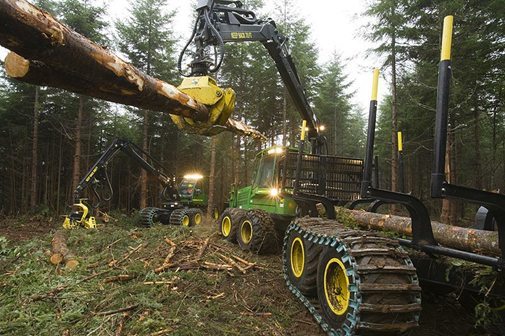 The first units scheduled for treatment this season serve as a backyard playground for many South Lake Tahoe residents. Units 20 and 1020 consist of 280 acres between Golden Bear Estate off Pioneer Trail and the Sierra Tract. Trees in Unit 20, the more upland unit, will be thinned and removed using whole tree yarding, in which the entire tree is cut and moved to the landing for processing. The treatment method for unit 1020, closer to the stream zone, will be cut-to-length thinning, in which trees are cut and processed on site by a harvester which removes limbs and brush and cuts the tree into lengths for transport.

Local residents use this area heavily for recreation, including mountain biking, trail running, hiking and dog walking and will need to relocate their activities while work is underway. The Forest Service will officially close the area, due to the hazards posed by heavy equipment operation and falling trees. The work should take about two months to complete. “By respecting posted closures, you can help us get the work done more quickly and safely”, said LTBMU Forest Supervisor Nancy Gibson. “When people enter the closed area, we have to stop work for their safety and the safety of our contractors, which causes delays.”

Possible alternatives for recreational access include National Forest lands south of the Golden Bear subdivision and the reopened Railroad Grade Trail east of Pioneer Trail. While the two treatment units are heavily criss-crossed with neighborhood trails, they have very few official roads and trails. After work is completed, the Forest Service will restore official trails but will not restore user-created trails. User-created trails may be covered with vegetation that has been ground up and left as surface cover to prevent erosion.

As the field season progresses, mechanical thinning may occur in a number of other South Shore locations as conditions allow, including Christmas Valley, Fallen Leaf Lake, Meyers, the Hwy. 89 corridor, Gardner Mountain and the Pioneer Trail side of Trout Creek. In addition to mechanical operations, the Forest Service also expects crews to complete at least 300 acres of hand thinning, which will include urban lots and areas near Hawley Grade in Meyers. Early season work also will include removing log decks, slash and biomass from landings in units near Trout Creek and Fallen Leaf Campground and decommissioning them.

For local residents who’ve been wondering what will become of the very large deck of logs near Camp Richardson Resort, Forest Service staff expect to eventually remove the pile, potentially later this year. As the project continues, the Forest Service advises that piles at landings will sit for periods of time until they can be burned or removed.

Prescribed burning of piles created by the work can occur throughout the year, if weather, fuel moisture and other conditions are right. The most active time for prescribed burning will be fall and winter, when Forest Service crews likely will be burning some of the thinned materials from last year, including piles near Trout Creek. Although the Forest Service doesn’t consider treatments complete until the piles are burned, the piles don’t represent an increased fire risk compared to an area that hasn’t been treated. Piles may sit for a while until conditions are right to burn them.

In addition to short-term impacts to recreation access, the major impacts from the South Shore project will include short-term smoke from prescribed burning and changes to the appearance of South Shore forests. Treated areas will look disturbed at first but will recover visually within a few years. “We understand that this work affects our South Shore residents and visitors, whether it’s because you can’t use a favorite trail for a while or are affected by prescribed fire smoke or just don’t like that we’ve changed the way the forest looks,” said Gibson. “We hope you will agree that decreased wildfire risk and healthier forests are worth it.”