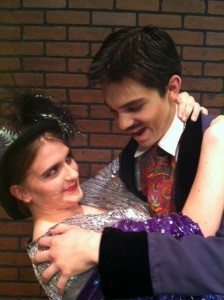 This “musical inside a comedy” won five Tony Awards in 2006, including Best Book and Best Score. The story concerns a middle-aged, asocial musical theatre fan playing the record of his favorite musical, the (fictional) 1928 hit The Drowsy Chaperone. The show comes to life onstage as he wryly comments on the music, story, and actors. The show is a smart parody of fluffy American Musical Theatre of the 1920’s.

“One of the most interesting things about The Drowsy Chaperone is that it was originally written as a stag party sketch,” says PAC director Rod Hearn. “The piece was so funny that the groom, Bob Martin, joined the writing team and went on to play the leading role in both the Broadway and London casts.”

Patrons are urged to take advantage of purchasing advanced seating online at www.showtix4u.com. Tickets are $11 for adults, and $9 for students, senior citizens, and WCSD staff. PAC is running a special opening night promotion: 2 seats for $15 (not available on the website and must be purchased in person).

For more information about the play, group discounts, or directions to the theatre, contact Rod Hearn at [email protected], or call the PAC Box Office at 775-334-7124.

PAC at Damonte Ranch is open to all students. Auditions for acceptance into the 2013-2014 drama, dance, and/or music programs are being scheduled. More information, call 775-334-7150.