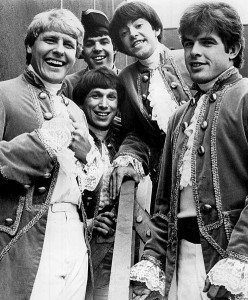 HAN NEWS — Today, in anticipation of one of its biggest and best events ever, Hot August Nights announced a lineup of star-studded headliners scheduled to entertain northern Nevada crowds later this year during its annual weeklong celebration of classic cars and rock ‘n’ roll. Scheduled to rock Reno and Sparks Aug. 6-11, is an incredible array of performers from some of the greatest decades in music, including Paul Revere and the Raiders, Tower of Power, The Righteous Brothers’ Bill Medley and more. Hot August Nights kicks off in Lake Tahoe Aug. 2-3 and in Reno and Sparks Aug. 6-11.

“This year’s Hot August Nights features a mix of rock ‘n’ roll legends and some of the top tribute acts in the country and we’re looking forward to welcoming them and our hundreds of thousands of spectators and participants later this year,” said Tony Marini, executive director of Hot August Nights. “We work hard each year to make each event bigger, better and more exciting than the year before and we’re confident that this year will be no different.”

Joining Paul Revere and the Raiders, Tower of Power and The Righteous Brother’s Bill Medley will be Lil’ Elmo & The Cosmos who will play a wide variety of songs from across the generations including some of today’s most popular rock ‘n’ roll hits; 60s Summer of Love will bring the memorable sounds of everyone from the Beach Boys to The Beatles; Chicago Tribute Authority, the world’s top Chicago tribute band; Ronny & the Classics who will cover some of the greatest hits from yesteryear; Simply the Best – Tribute to Tina Turner who will rock the stage with the music of the great Tina Turner; and The Temptations Review featuring Dennis Edwards who will bring to life the soulful sounds of one of Motown’s legendary acts.

All performances are scheduled to take place at 8:15 p.m. beginning Tuesday, August 6 and will run through Saturday, August 10. The following concert dates and times are subject to change:

Registration for the 2013 Hot August Nights is still open. For more information or to register, call (775) 356-1956 or visit www.hotaugustnights.net. For the latest updates on Hot August Nights, find us at www.Facebook.com/HotAugustNights or follow us on Twitter @HotAugusNights.