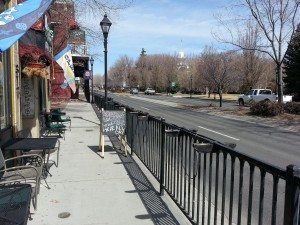 The project would remove these fences and add curbside parking.

On March 14th I attended a workshop presented by the Carson City Public Works Department. The presentation outlined a proposal to create a pedestrian-friendly environment on Carson Street through the downtown area of Carson City between Fifth Street and Ann Street. This Road Diet, as they are commonly called, would include using striping to reduce travel lanes from four to two, and add on-street parallel parking. The protective metal fence would be removed along main street (with exception of the historic iron fence in front of the Capitol), but the sidewalks, median, and turn lanes would not be altered. The estimated cost of the project is $30,000.

With good knowledge of the benefits of road diets, and having visited many successful and vibrant downtowns in other cities, I expected a positive meeting where the city, business owners, and citizens would come together to get this project done. Instead, the mood soured when questions and comments were opened to the public following the presentation. Many in the room became emotional and even angry, not because of the material presented, but because they had already made up their minds ahead of time. Some people had prepared statements and petitions. One gas station owner, whose business is north of the area of proposed changes, feared that decreased traffic on Carson Street would negatively impact his businesses. Thankfully Doreen Mack, a strong proponent of the project, was on hand to counter some of the arguments. Unfortunately, though, the damage was done, and the project was presented rather negatively in the newspaper.

Here’s a list of some of the major complaints from the meeting:

What is a Road Diet?

While Public Works did a great job with the technical specifications of the project, I don’t think it was made clear the benefits of a road diet. While the presenters did refer to successful case studies, most of the audience could only hear the words “Road Block“. But what is a road diet really?

Here’s a great explanation of a road diet from StreetFilms.org:

What’s a road diet? Quite simply, traffic-calming expert Dan Burden told Streetfilms, “A road diet is anytime you take any lane out of a road.”

The first time people hear about a road diet, their initial reaction likely goes something like this: “How can removing lanes improve my neighborhood and not cause traffic backups?” It seems counterintuitive, but taking away lanes can actually help traffic flow smoother while improving safety for everyone.

And here’s something to keep in mind during this era of lean budgets: Road diets are a highly-effective infrastructure improvement that can be implemented quickly and at low cost.

Here’s a fantastic video that explains the road diet, and shows the converted streets in action:

Moving Beyond the Automobile: Road Diets from Streetfilms on Vimeo.

Moving Beyond the Automobile: Road Diets

So as you can see, a Road Diet is hardly a Road Block. It doesn’t even necessarily mean we’ll see a large decrease in overall traffic flow. While Main Street and nearby streets do see some congestion at times throughout the day, it is generally short lived; for example, traffic can pick up at 5:00 PM when people get off work, but it generally calms down again in 10 – 15 minutes. Drivers may look for other routes during these peak times if Carson Street were to be narrowed, but for most of the day, a lane in each direction should be fine. Nearby Stewart Street is currently under capacity, and would make a good alternative should anyone want to take an alternate route through downtown. 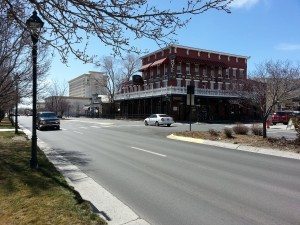 What is there to do Downtown?

A common theme from the opposition at the meeting was that there simply isn’t anything downtown that is worth promoting. One person even took to the microphone to say there weren’t even any businesses on the east side of the street! It was pretty obvious that these people weren’t in the least bit familiar with downtown. They should take the time to walk the downtown corridor to see just what is available, not only for tourists, but for the people living in Carson City as well.

In the corridor of this project, on both sides of the street, there is an abundance of things to do. There are the Capitol Grounds, coffee houses, restaurants, a brewery, music venues, art galleries, museums, offices, bars, hair salons, a yoga studio, a gym, an antique shop, casinos, gift shops, motels and more. In the warmer months, there are farmers markets, outdoor concerts, bike rides, car shows, and other special events that draw hundreds of people. In the winter there is a skating rink that is enjoyed by many. Just off Main Street are many other shops, used book stores, a florist, restaurants, the Brewery Arts Center, and our public library. Clearly, there is plenty to do and see. Not only are these places visited by tourists, but they have become invaluable to Carson City residents as well. You can’t discount the tremendous social and cultural value of our city center. And thanks to our growing list of outdoor activities, people from out of town are making the drive to enjoy our trails, paths, and aquatic trail. Carson City is a destination.

Benefits of a Road Diet in Carson City 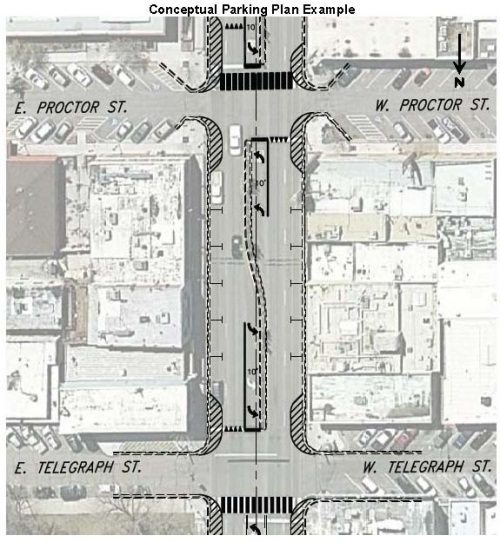 A road diet is not “an experiment”. Cities all over the country have implemented them with great success. Big cities like San Francisco have put several of their busy streets on road diets, and have seen an increase in foot and bicycle traffic. In many cases, property values go up, and business increases where the streets have been converted to be more livable. By reallocating the space on our main street to accommodate those who live here, work here, and visit our businesses, versus privileging those who would simply drive on through, we will enjoy the benefits that these other cities have seen. It also makes sense that businesses that are located outside the area of this plan would benefit as well. An increased visitation downtown would lead to more demand for business north and south of downtown like service stations, grocery stores, movie theaters, and hotels.

Luckily the Carson City Public Works presentation was informational only. City Supervisors were in attendance to listen to the meeting, but nothing was voted on. The vote to approve this project will take place at a Board of Supervisors meeting in the near future. For those of you who would like to see a better bicycle and pedestrian friendly Carson City, and a more livable downtown, I’ll be putting together some information to help you get involved and get your voice heard. If we do nothing, we will most certainly find out that someone else has decided for us.

Jeff Moser is proprietor of BikeCarson.com, which covers bicycle news, culture, and lifestyle in Carson City, Nevada. Carson City is at the base of the Eastern Sierras, creating a wide variety of cycling opportunities.