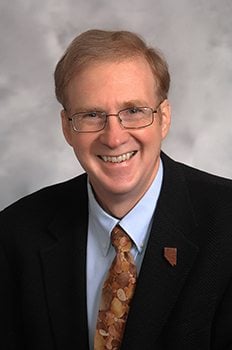 Jonathan Price, former director of the Nevada Bureau of Mines and Geology at the University of Nevada, Reno and state geologist emeritus, received a Gold Medal from the Mining and Metallurgical Society of America (MMSA) at their annual conference Feb. 25. The highest honor awarded by the society, the Gold Medal is presented to individuals who have made significant contributions to the mineral industry.

Price was awarded the prestigious Gold Medal in a ceremony at the society’s meeting in Denver where he delivered an acceptance speech making comparisons to President Herbert Hoover and his own life.

“I am proud to be a part of the mining industry and to receive the award,” Price said in his acceptance speech. “I’m especially delighted in part because of the connection with Herbert Hoover, one of the first members of MMSA and, along with his wife Lou, the first recipient of the Gold Medal. I have had some roundabout connections and parallels with Herbert Hoover throughout my career.”

The first Gold Medal was awarded in 1914 to Hoover, who was a mining engineer before he became U.S. President, and his wife Lou Hoover, a geologist. Since then, 34 Gold Medals have been awarded.

“The Mackay School of Earth Sciences and Engineering is extremely proud of Jon Price for his winning the prestigious MMSA gold-medal award,” said Russell Fields, director of the Mackay School, of which the Bureau of Mines and Geology is a public service department. “He has devoted his very successful career to developing the field of geological sciences as it relates to the economic production of minerals and I can think of no more deserving recipient of this award.”

In his speech, Price mentions Hoover going to Australia after leaving Stanford and compares it to himself going to Nevada while working on his dissertation as a doctoral student at the University of California, Berkeley. He also notes Hoover going into public service the same year he won the MMSA Gold Medal and describes his own experience of going into public service, first with the Bureau of Economic Geology, the state geological survey of Texas.

“The experience there, which included some interesting silver, beryllium, rare-earth and industrial mineral deposits, was the perfect background for coming back to Nevada,” Price said.  “Being the Nevada State Geologist for 24 years was a wonderful job; I might even say perhaps more fulfilling than Hoover’s presidency.”

The MMSA gives the Gold Medal for “conspicuous professional or public service for the advancement of the science of mining and metallurgy, or of economic geology; for the betterment of the conditions under which these industries are carried on, for the protection of mine investors, and especially for the better protection of the health and safety of workmen in the mines and metallurgical establishments.”

“The leadership and vision of Jonathan Price has built one of the finest organizations in the United States,” Jeff Thompson, dean of the College of Science, said about Prices’s work in the Bureau of Mines and Geology. “He richly deserves the prestigious Gold Medal Award from the Mining and Metallurgical Society of America and we are very proud of his accomplishments.”