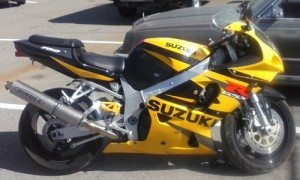 WCSO NEWS — The Washoe County Sheriff’s Office Special Operations Division is investigating a suspicious death involving an unknown deceased male that was located inside of a vehicle in Sun Valley.

On Monday, March 25, 2013, at approximately 3:00 p.m., Washoe County Deputies responded to Wewoka Way on a report of shots fired in the area. When deputies arrived on scene, they discovered a deceased male with multiple gunshot wounds, inside of a vehicle.

This is an ongoing investigation. The cause of death is pending a medical examination which will be completed by the Washoe County Medical Examiner’s Office. The decedent’s name is being withheld pending next of kin notification.

A yellow Suzuki GSR 750 was seen leaving the area of Wewoka Way shortly after the time of the shooting and was found abandoned one and one half blocks away on Garden Way. Detectives are interested in speaking to anybody who may have seen this motorcycle or its driver.

Anyone having information relating to this case should contact the Washoe County Sheriff’s Office Criminal Investigation Unit at 775-328-3320, Secret Witness at 775-322-4900, www.secretwitness.com, or text a Secret Witness tip to 847411 (TIP 411) keyword-SW.