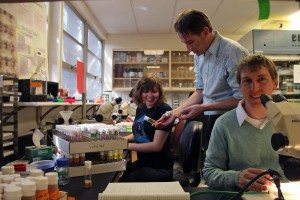 UNR NEWS -– A new mechanism for guiding the growth of nerves that involves the cell-death machinery has been found by scientists at the University of Nevada, Reno that may bring advances in neurological medicine and research. The team obtained the evidence in studies of fruit flies and reported their discovery in an article published in the prestigious science publication Cell Reports.

“Although the fly is a relatively simple organism, almost every gene identified in this species appears to be carrying out similar functions in humans,” said Thomas Kidd, associate professor in the University’s biology department in whose lab the work was performed.

“Flies are useful because the neural mechanisms we are studying are similar to those in mammals,” said Gunnar Newquist, lead author of the Cell Reports article and a post-doctoral neuroscience researcher in Kidd’s lab. “We’ve found something no one has seen before, that blocking the cell-death pathway can make nerves deprived of guidance cues figure out the right way to connect with other neurons. This was completely unexpected and novel, but really exciting because it changes the way we look at nerve growth.

“Neurons have a natural ability to die, if they fail to make the right connections they usually die. Neurons, like most other cell types, have the capacity to commit suicide and many do so during the formation of the nervous system.”

The wiring of nervous systems is composed of axons, specialized extensions of neurons that transmit electrical impulses. During development axons navigate long distances to their targets by using signals in their environment. Netrin-B is one of those signals. Kidd, Newquist and colleagues have shown that Netrin-B also keeps neurons alive.

“Take away the Netrin-B and growth and cell death goes haywire,” Newquist said.

This led them to the discovery that the cell-death machinery is active in growing nerves, and appears to be an integral part of the navigation mechanism.

“We use fruit fly genetics to study how these axons navigate these long distances correctly when developing,” Kidd said. “Understanding the mechanisms they use to navigate is of great interest, not only for understanding how our brains form, but also as a starting point to devise ways to stimulate the re-growth of axons after injury, especially spinal cord injuries.

“Our work suggests that therapeutics designed to keep neurons alive after injury may be able to stimulate neurons to start re-growing or sprouting new connections.”

“I am very pleased to see Tom’s and Gunnar’s hard work come to fruition,” said Chris von Bartheld, director of the University’s cell-biology COBRE and a professor in the University of Nevada School of Medicine. “Linking axonal path finding and cell death signaling opens exciting new venues to better understand both topics. It also shows that our recently established center in cell biology is achieving its goals of producing top-level biomedical research.”

The research featured in the Cell Report article is a major focus of Kidd’s lab, which is one of five research projects in the COBRE. The center is a strong stimulus to integrate the University’s research in cell biology, developmental biology, signaling and neuroscience and to develop collaborations between basic scientists and clinicians.

The research article is featured on the front page of the Cell Report website, along with a video of Kidd and Newquist talking about the research, in their new “At the Movies” section.

The biomedical research center (www.medicine.nevada.edu/cobre) is a collaboration between the College of Science and the University of Nevada School of Medicine.