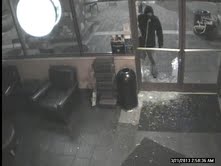 The Reno Police Department has seen a series of commercial burglaries occurring this month in which auspects are targeting smaller stores and restaurants.

Starting in early March, RPD has had over 17 commercial burglaries reported in Reno, with the suspects primarily focusing in the south area of town. Recently the suspects have began to target businesses near downtown, and two additional cases have been reported in northwest Reno.

The two suspects have been breaking into the businesses between the hours of midnight and 0400, and target smaller restaurants and other stores which have cash registers clearly in the open. In most of the incidents the suspects break out a window and enter the business, disregarding any alarm system. The suspects spend little time inside and run directly to the safes and cash registers. The suspects are captured on video but are seen wearing hooded clothing, gloves and face masks.