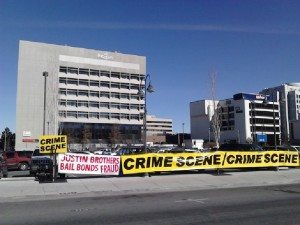 The Justin Brothers Bail Bonds company was the target of a protest held March 26, 2013 with protesters unfurling the “World’s Largest CRIME SCENE tape” and other large signs like “Justin Brothers FRAUD” and “End the Rampant CORRUPTION.”

What’s all the commotion about? Protester Ty Robben said he was the victim of illegal activity by the Justin Bros (Dennis and Richard Justin) along with their “bounty hunter” Doug Lewis from Reno and Carson City. Robben said the Justin Bros are the subjects of a multi-million dollar lawsuit, five criminal charges (assault, battery with taser gun, violation of 847.5, etc.) and complaints with the Nevada Secretary of State for alleged failure to have a valid business license and the Nevada Division of Insurance for alleged fraudulent business activity related to the bail bond and bounty hunter (also called bail recovery) industry in Nevada.

Robben said he was originally involved in a legal situation for serving a court subpoena for the previous state pilot, Jim Richardson, to the former Nevada Department of Transportation Director Susan Martinovich. Robben was on bail for what he said was an trumped up misdemeanor charge of assault which he said was later dismissed. While on bail, and although not a “fugitive,” Robben said he was wanted by the Justin Bros for an alleged violation of his pre-trial conditions.

Robben said the Justin Bros claim they had a warrant from the Carson City Justice Court signed by Judge John Tatro. The problem, Robben said, was that bail bondsmen and bounty hunters are not deputized peace officers, and they crossed into South Lake Tahoe in the State of California where Mr. Robben lives.

“These idiots acted above the law by acting under the color of law” said Robben, pointing out that bounty hunters like Dog the Bounty Hunter (who has a new series coming out April 2013 on CMT) are basically citizens and not deputized law enforcement. Bounty hunters do not serve warrants — police or the Sheriff typically perform that duty, Robben said.

Robben, who is represented by Sacrament attorney Julius Engel, said he has filed a multi-million dollar civil lawsuit against the Justin Bros in Sacramento Federal Court as case ROBBEN v. JUSTIN et al., Case No.: 2:13-cv-00238-MCE-DAD.