By ThisIsReno March 12, 2013
Britany Sapien of Merced County, California and her family were all smiles after being reunited with their dog Buddy at Washoe County Regional Animal Services on Friday, March 8. The Yorkshire Terrier had been missing for over two years, but his microchip helped get him home. 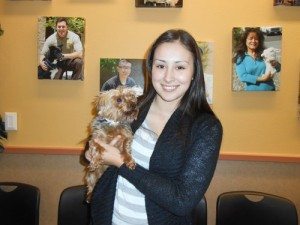 Britany Sapien of Merced County, California and her family were all smiles after being reunited with their dog Buddy at Washoe County Regional Animal Services on Friday, March 8. The Yorkshire Terrier had been missing for over two years, but his microchip helped get him home.

WCSO NEWS — More than two years after Buddy disappeared from the yard of his Merced County home, the little Yorkshire Terrier was back in the arms of his loving family thanks to the microchip he received as a puppy.

Buddy was over two hundred miles from home when he was found by a resident in the Lemmon Valley area north of Reno and brought to Regional Animal Services last week.  Using information from the dog’s microchip, Animal Services staff contacted owner Britany Sapien in Planada, California.

“At first we thought it was a prank,” Britany’s mother Martha Mayo said. “We had searched and searched for Buddy after he disappeared and, after all this time, had pretty much given up hope that we’d ever see him again.

“I know it was the microchip that brought Buddy home.”

Mayo said Buddy had been given to her daughter as a gift from her daughter’s boyfriend. It didn’t take long for the rest of the family to fall in love with the little puppy and so the entire family arrived at Animal Services last Friday to bring Buddy home.

“Buddy was so excited to see his family again that he literally began shaking all over,” Regional Animal Services Director Barry Brode said. “It was a moment of joy for the dog, the family and the staff here at Animal Services. This is why we love doing what we do.”

Brode said that it appears as if someone had taken Buddy from his home and that the dog had then been brought to Nevada and sold to a Reno area resident who had no idea there was a family still desperately trying to locate their missing dog. Somehow the dog got loose and was brought to Regional Animal Services where it ‘s microchip was scanned and the orginal owners located.

“In the end, Buddy’s microchip not only helped us locate his family, it helped us to determine proof of ownership,” Brode said.

Brode said that Buddy’s story is an important reminder for people who are looking to purchase or adopt pets to always make sure they are working with a legitimate dealer or adoption agency and are fully aware of an animal’s background before investing money and becoming emotionally attached to a pet.

Stories like Buddy’s have also inspired the staff at Regional Animal Services to initiate a yearlong campaign to provide free micochips to all Washoe County pet owners.

“We strongly believe that microchipping is your pet’s best chance of returning home if it ever becomes lost,” Brode said. “We want to do everything we can to help reunite lost pets with their owners as efficiently and effectively as possible.”

Through January of 2014, free microchips will be available from Regional Animal Services at 2825-A Longley Lane from 10:00 a.m. to 4:00 p.m. Monday through Friday (excluding holidays).

Brode said the goal is to microchip at least 5,000 pets during the campaign. To help reach that goal, Regional Animal Services has also scheduled a series of mobile microchip clinics on a regular basis throughout the next year. Funding for the microchips used in the mobile clinics are provided by Maddie’s Fund®.

Locations and dates for future mobile clinics will be announced at WashoeAnimals.com as information becomes available. Pet owners are asked to bring their dogs properly leashed and their cats in appropriate cat carriers.