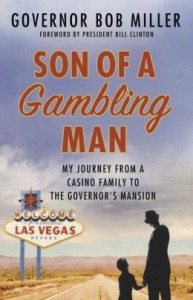 SON OF A GAMBLING MAN NEWS RELEASE – When Bob Miller arrived in Las Vegas as a boy, it was a small, dusty city, a far cry from the glamorous, exciting place it is today. Driving the family car was his father Ross Miller, a tough guy—though a good family man—who had operated on both sides of the law on some of the meaner streets of industrial Chicago.

The Miller family was as close and as warm as “Ozzie and Harriet,” as long as you knew that Ozzie was a bookmaker and a business acquaintance of some very dubious criminal types.

As Bob grew up, so did Vegas, now a “town” of some two million. Ross Miller became a respectable businessman and partner in a major casino, though he was still capable of settling a score with his fists.

And Bob went on to law school, entering law enforcement and eventually becoming a popular governor of Nevada, holding office longer than anybody in the state’s history. And the Miller family’s legacy continues. Bob’s own son is presently serving as Secretary of State, and also holds a blue belt at Reno’s Charles Gracie Brazilian Jiu Jitsu Academy.

A warm family memoir, the story of a city heir, with just a little bit of The Godfather and Casinothrown in for spice, Son of a Gambling Man is a unique and thoroughly memorable story.