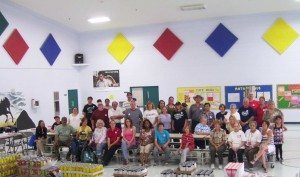 HEALTHY COMMUNITIES COALITION NEWS RELEASE DAYTON – In Dayton, residents are fighting local hunger by joining the Feinstein Challenge. The campaign, which takes place March 1 through April 30 each year, inspires groups and individuals to come up with creative ways to collect food or raise cash for their local food pantries. For instance, in Dayton, school counselor Bill Bruni has promised to shave his head and throw a pizza party if students collect enough “mac & cheese” for the Dayton Food Pantry!  Dorothy Wingard, coordinator for the local Challenge, explained, “The Feinstein Challenge is a win-win situation. If groups or individuals donate non-perishable food items or money to Dayton Food Pantry in March and April, the Feinstein Foundation will add funds.”

Donations of non-perishable food, cash, checks and pledges received from March 1 through April 30 will be counted for the Feinstein Challenge. Look for conveniently located “Feinstein Challenge” donation barrels, boxes or front office donation envelopes at many businesses, schools, and offices in Dayton, or drop donations at the Dayton Food Pantry at 4 Enterprise Way and HWY 50, between 10 a.m. to 4 p.m., Monday through Thursday.

Freida Carbery, director of Healthy Communities Coalition’s food pantry in Dayton, said, “The support of local schools, businesses, clubs, and individuals will make this challenge a huge success for our pantry and community. In 2011 and 2012, the Feinstein Challenge generated over 23,000 items of food donations, and nearly $8,000 in cash donations to the Dayton Food Pantry. The community support is so important, because on January 19th alone, the Dayton Food Pantry served 693 people – the majority were elderly or children.”

Alan Feinstein is a nationally known philanthropist and humanitarian whose past 14 challenges to fight hunger resulted in over $1 billion for thousands of agencies nationwide. For the 17th consecutive year, Alan Shawn Feinstein will divide $1 million among anti-hunger agencies nationwide using it as a spur to raise funds during March and April, 2013. For more information, see feinsteinfoundation.org.