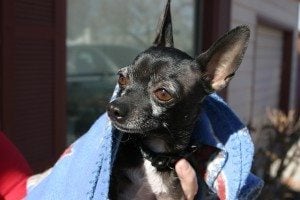 Solo is reunited with his family after missing for eight months thanks to microchip.

WASHOE COUNTY SHERIFF’S OFFICE NEWS RELEASE – Solo’s favorite blue blanket remained unused for eight months. The little Chihuahua’s owners thought it would never be used again, but Juanita Avila held on to it anyway. Last Friday, Solo, his owners and his blanket were joyfully reunited thanks to a microchip.

The three-year-old Chihuahua got out of Avila’s Sparks home in May of 2012 and disappeared. Avila checked the Animal Services website daily hoping for news of her dog, but months went by without a word. “Everyone knew how sad I was,” Avila said. “I thought about him every day and just hoped he was okay and that somebody was being good to him.” Avila had given up hope, but held on to Solo’s blue blanket anyway. Then, last Friday, she got the call from Regional Animal Services. Solo had been found running down Fourth Street in Reno. Because Solo is licensed and has a microchip, getting the lost dog home was easy.

“We believe that microchipping is your pet’s best chance of returning home if it ever becomes lost and we want to do everything we can to help reunite lost pets with their owners as efficiently and effectively as possible,” Regional Animal Services Director Barry Brode said. Brode said over 400 pets were microchipped during the first week of the campaign. The goal is to microchip a minimum of 5,000 pets by the end of January 2014.

A microchip is a small, electronic chip enclosed in a glass cylinder about the size of a grain of rice. The microchip is activated by a scanner which receives information about the pet’s owners and home from the chip. In most cases, microchipped pets can be scanned in the field and returned to their homes without ever having to be brought to the shelter, reducing stress for the pet, the pet owner and the cost of operating Animal Services.Once microchipped, Animal Services encourages pet owners to register their microchip online at homeagain.com to ensure proper identification if the pet should ever become lost outside of Washoe County.

Through January 2014, free microchips will also be available from the Regional Animal Services Facility on Longley Lane between the hours of 10:00 a.m. to 4:00 p.m. Monday through Friday (excluding holidays).

For more information about this special microchipping campaign, visit WashoeAnimals.com.