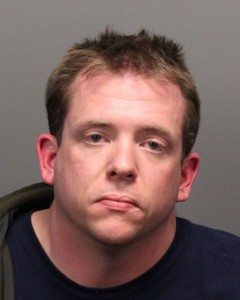 The Washoe County Sheriff’s Office arrested a residential burglary suspect that was initially reported as a suspicious person by a watchful undisclosed neighbor on Wednesday, February 27, 2013 at approximately 12:18 p.m. in the 4300 block of Ross Drive in Reno.

Upon arrival, deputies received updated information that the suspicious person had been observed moving several items away from a residence.  Responding deputies contacted the suspicious person, identified as John David Markey a 33-year-old Reno resident.  At this residence, deputies observed damage to a door consistent with signs of it being forced open.  Deputies confirmed that no one was home at this particular residence as well.

Sheriff’s Patrolmen and K-9 Teams canvassed the surrounding neighborhood for the possibility that other homes may have been tampered with but no additional victims were identified.

Markey was arrested, transported and booked into the Washoe County Sheriff’s Office Detention Facility without incident.  Markey was charged with Burglary and his bail is set at $20,000.

The Sheriff’s Office commends the watchful undisclosed neighbor for seeing criminal or suspicious activity and calling the dispatch center with detailed eye-witness information.  The community is encouraged to call our non-emergency dispatch center at 775-785-WCSO (9276) or in an emergency situation dial 911.