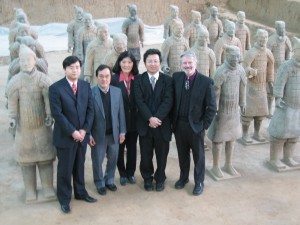 The Desert Research Institute will soon be unveiling of “The General,” a life-size replica of a Terra Cotta Warrior statue at DRI’s Reno campus.

Dr. Judy Chow and John Watson have traveled to China for nearly two decades conducting research. In that time, the internationally recognized air quality experts have collaborated with Chinese scientists and institutions to come up with solutions to address air quality issues. Both Chow and Watson discovered that the ancient 2,000-plus year old Terra-Cotta Army, revealed by Chinese peasant farmers in Xi’an in 1974, was deteriorating as a result of air pollutants and from nearly two million tourists visiting the museum annually where the statues are housed. The Terra-Cotta discovery has become one of China’s greatest historical treasures. Ground penetrating radar has revealed that approximately 8,000 warriors, horses, and chariots exist, of which little more than 1,000 have been excavated. This unearthing also led to the discovery of where China’s first emperor, Qin Shi Huang was buried.

The change in appearance of the statues after 30 years of above-ground exposure, however, prompted the researchers to work with Chinese officials and DRI President, Dr. Stephen Wells to sign a two-year Memorandum of Understanding (MOU) with the Chinese Academy of Science’s Institute of Earth Environment in Xi’an along with China’s Polytechnic Institute and Emperor Qin’s Terra-Cotta Warrior and Horses Museum. “In Xi’an, the air quality was affecting many precious artifacts through coal-fired power stations, vehicle exhaust, biomass burning, visitors, and increase in temperatures,” Dr. Chow explained.

Chow and Watson led the efforts in measuring pollutant exposure levels, clarifying the material damage mechanisms, and evaluating remediation methods. They would find that outside air pollution, temperatures, humidity in the museum and pollution from tourists was leading to the Terra-Cotta Army’s overall decline. “The exposure, nature of the damages, and remediation all take years to study,” Dr. Watson explained. They helped in implementing stricter guidelines for excavation of these statues with air quality and environmental controls intact.

Background on how “The General” made it to DRI:

In Fall of 2012, DRI Trustee Tom Gallagher and his wife Mary were on a delegation support mission with Dr. Wells and other DRI key players in China. Upon touring the museum in Xi’an, the Gallagher’s got a first-hand glimpse of the extensive work and collaboration between DRI and China. Already a major supporter of the institution, the Gallaghers decided that donating a replica to house at DRI’s Reno campus would be an great opportunity to bring a piece of China’s history and DRI’s involvement with the Terra Cotta back to Nevada.

“The General calls attention to the terrific work being conducted by DRI scientists,” Tom Gallagher said. “I’m proud to have the opportunity to be supportive.”

“It is support from trustee’s such as the Gallagher’s that allow DRI to continue our efforts in remaining a globally recognized institution,” added Dr. Wells.