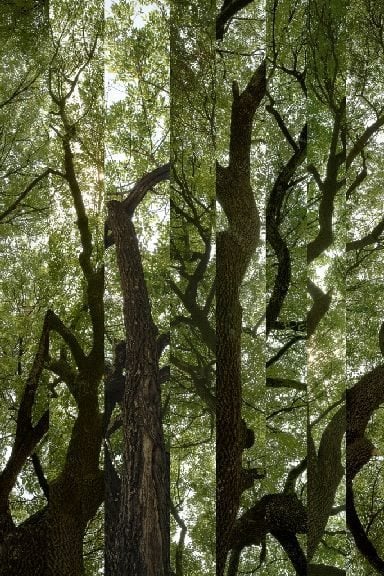 “Cholula Canopy” by Peter Goin is among the works featured at the Nevada Arts Council’s OXS Gallery.

CARSON CITY — Award-winning artist and local professor Peter Goin will discuss his work from 5 to 7:30 p.m. Thursday, Feb. 7 at the OXS Gallery, 716 N. Carson St. in Carson City. Photographs by Goin are featured in the exhibit “Arboles de Cholula,” Spanish for Trees of Cholula, on display through March 22.

In “Arboles de Cholula,” Goin offers a long-term visual analysis of the canopy of mature, historical trees, some more than 400 years old, in the Mexican city of Cholula. About two hours from Mexico City, Cholula is today a place where people interact graphically with nature, carving their devotion into the leaves of maguey plants.

“These cacti line the walkway to the Santuario de Nuestra Señora de los Remedios that rests atop Cholula’s Pirámide Tepanapa, the widest pyramid in the world,” Goin said. “The trees that compose the canopy above the mind’s eye have become canvases, graphic reminders of the complexity of urban nature.”

Goin, of Reno, is chairman of the department of art at the University of Nevada, Reno and foundation professor. He is the author of numerous books, including: “A Field Guide to California Architecture” with Paul F. Starrs, co-author; “South Lake Tahoe: Then & Now”; “Nevada Rock Art”; “Black Rock” with co-author Starrs; “Changing Mines in America” with C. Elizabeth Raymond, co-author; and “A Doubtful River” with Robert Dawson and Mary Webb, co-authors. His photographs have been exhibited in more than 50 museums internationally. Goin received two artist fellowships from the National Endowment of the Arts. His video work has earned him an EMMY nomination as well as the Best Experimental Video Award at the 2001 New York International Film & Video Festival. Goin was awarded the Governor’s Millennium Award for Excellence in the Arts and an honorable mention fellowship grant from the Nevada Arts Council in 2013.

The OXS Gallery is open from 8 a.m. to 5 p.m. Monday through Friday at 716 N. Carson St. in Carson City. The Nevada Arts Council, a division of the Nevada Department of Tourism and Cultural Affairs, is the agency charged with ensuring that state and national funds support cultural activity and encourage participation in the arts throughout Nevada. In addition to providing hundreds of grants to arts and community-based organizations, schools, artists and local municipalities throughout the state, the Arts Council coordinates a variety of statewide programs and activities such as the annual Poetry Out Loud recitation competition for high-school aged students, traveling exhibits, artist residencies, workshops and cultural assessments. For more information, please visit the department’s web site at www.nevadaculture.org.