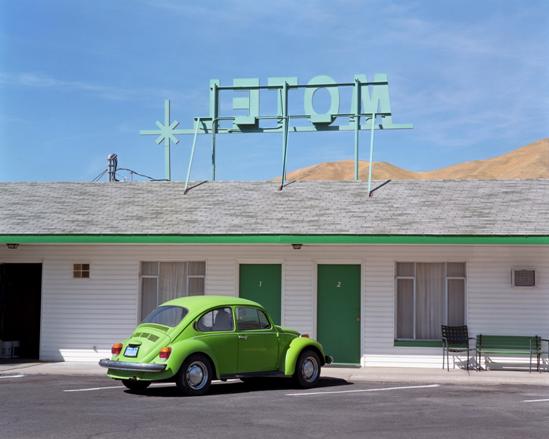 “Stop the Car, Dad!” is the debut exhibit featured in the new Laxalt Building Gallery at the offices of Nevada Magazine in Carson City through March 1. The new art space is in the historic building that rings chimes throughout the community at 401 N. Carson St.  The gallery is open to the public, and admission is free.

“From abandoned military installations to roadside architecture that reflects local flair, the sites Lauritzen photographed reveal a certain irony often underlying everyday encounters in the Nevada desert,” said the Nevada Arts Council’s Fran Morrow.  The council organized the show as part of its Nevada Touring Initiative – Traveling Exhibition Program that brings diverse art projects to communities across Nevada and beyond.

“Stop the Car, Dad!” is named for the moment of curiosity that often accompanies the discovery of a roadside attraction. The images record places where development gave way to dilapidation. Now abandoned, these way stations are evidence of the “boom and bust” Nevada lifestyle. In the photo collection, solitary signs and deserted buildings emerge as intriguing records of history.

Highly regarded as a representational and landscape photographer, Lauritzen was also considered an abstract artist working with photography. While maintaining a full teaching load, curating a gallery and conducting workshops throughout Nevada and the region, he continued to challenge himself as an artist until his death in 2007.

His work has been in hundreds of solo and group exhibitions in 17 states and is represented in a number of public, corporate and private collections across the nation and abroad. Examples of Lauritzen’s art are housed at the Special Collections and Archives, University of California, Santa Cruz. Other works are at the Kresge Art Museum in Lansing, Michigan, the Carnegie Museum of Art in Pittsburgh, the Museum of Contemporary Art in Los Angeles and the Israel Museum in Jerusalem.

The traveling exhibits are managed by the Artist Services Program of the Nevada Arts Council.  In partnership with the Nevada Commission on Tourism and Nevada Magazine, the new Laxalt Building space will house occasional exhibits to stimulate discussion.  Funding is provided by the Nevada State Legislature and the National Endowment for the Arts. The Nevada Magazine office is open Monday through Friday 8 a.m. to 5 p.m.

The Nevada Arts Council, a division of the Nevada Department of Tourism and Cultural Affairs, is the agency charged with ensuring that state and national funds support cultural activity and encourage participation in the arts throughout Nevada.  In addition to providing hundreds of grants to arts and community-based organizations, schools, artists and local municipalities throughout the state, the Arts Council coordinates a variety of statewide programs and activities such as the annual Poetry Out Loud recitation competition for high-school aged students, traveling exhibits, artist residencies, workshops and cultural assessments. For more information, visit the department’s web site at www.nevadaculture.org.