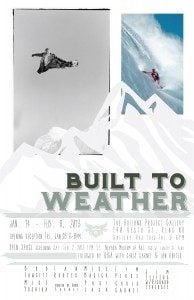 Exhibit opens January 14 with the opening reception scheduled for Friday, January 18, and a special movie premier at the Nevada Museum of Art Saturday, February 2

The Holland Project Gallery will host Built to Weather, a group photography exhibit celebrating eras, pivotal moments and stellar landscapes related to snowboarding. It’s the first time a show of this context and caliber has been exhibited in Reno.

The exhibit curator Chris Carnel has tracked down prominent works from these diverse globetrotting photographers to form a unique crew of individuals intrinsically involved with snowboarding. This diverse selection of photographs features pinnacle, historical moments involving iconic individuals that have lived and breathed the life of the sport.

“I think this group of artists definitely has a unique voice, so to speak,” said Carnel about the featured photographers. “It’s the way they document or documented, with a camera, an historical event or even themselves riding, like Mike Basich did. Their lifestyle involvements as individuals in the sport play a huge role in their work.

Carnel added, “This is an exhibit that all snowboarders and snow sports enthusiasts won’t want to miss.”

In conjunction with the exhibit, the Nevada Museum of Art will be screening Basich’s film Open Space at 1 p.m. on Saturday, February 2. Admission is $5. The film will be followed by a question and answer session with Chris Carnel and Ian Ruhter. They will speak about their involvement in documenting the sport; Ruhter from both sides of the camera. Ruhter will also elaborate on his cutting edge style of shooting involving a truck and wet plates as well his work in Built to Weather and being an ex-pro in the sport.

Of the group, Bud Fawcett has photographed some of the inaugural moments in snowboarding history. Fawcett moved to Tahoe in the early 1980’s. He came from the Blue Ridge Mountains of North Carolina with a background in photojournalism to document the earliest inklings of what freestyle snowboarding would become. Fawcett also became the photo editor for the legendary International Snowboard Magazine in the late 80’s. His subjects like Terry Kidwell, Shaun Palmer and Keith Kimmel were way ahead of the curve and heavily influenced by iconic vert skaters like Hosoi and Caballero.

Representing a more current end of the spectrum, Richard Leversee photographs of Jim Zellers in the exhibition depict a noteworthy moment in snowboarding history. Zellers, early mountaineer in the world of snowboarding, was documented by Leversee as the first and only person to snowboard the 45 degree cable-route side of Yosemite’s Half-Dome. In 2001, after five years of winter attempts, Zellers and Leversee hiked through the night to arrive in perfect conditions to climb and freeride down Half-Dome unassisted.

Curating these images by Fawcett and Leversee as well as photographs by Ruhter, Basich, Yoshida, Laca and Peare, Chris Carnel is drawing from his own experience within the sport. Having grown up in Reno, Carnel started shooting photography in the mid-80’s. By the end of the 90’s, he had worked with International Snowboard Magazine ISM (ISM), Snowboarder Magazine, Thrasher, Trans-World Snowboarding, Bikini and Heckler. In 2001 he helped publish A Declaration of Independents. Through his early and continued involvement in snowboarding, Carnel brings an authentic knowledge of the sport to the work he has selected for the exhibition.

For more information on Built to Weather, please contact Sarah Lillegard at [email protected] or 775.287.6882, or visit www.hollandreno.org.

Where: The Holland Project Gallery, 140 Vesta St. between Wells Avenue and Virginia