Farm Bureau encourages a “No” vote on UNR farmland development 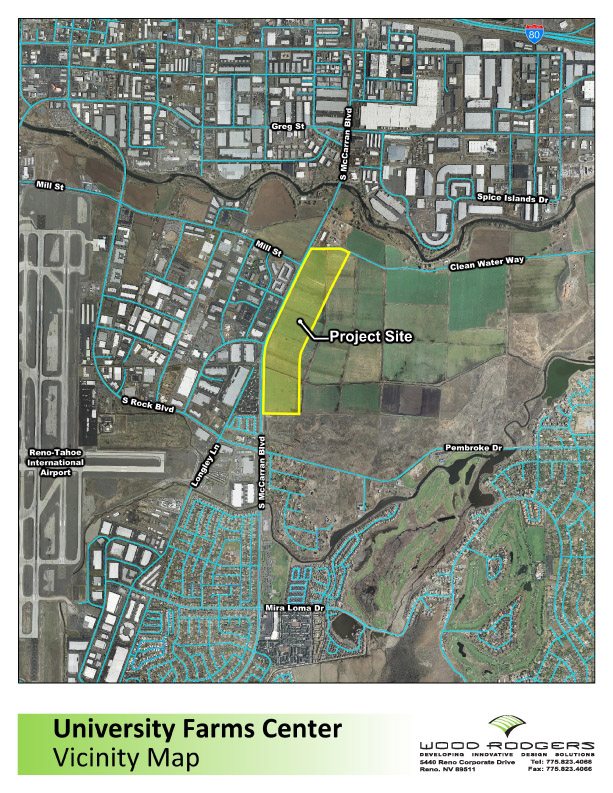 Land parcel at the Main Station Field Laboratory proposed to be rezoned by the University of Nevada.

FROM THE FARM BUREAU NEWSLETTER

On a 5-1 vote, the Reno Planning Commission gave their favorable recommendation to the proposal that the University of Nevada, Reno is seeking to convert a 104 acre tract along McCarran Blvd in Reno to an office/commercial flexible use or a business park complex. The recommendation now advances back to the Reno City Council who will likely take up the matter at their January 30th meeting.

During the Planning Commission’s public hearing on the proposal, the only supporting advocates were the University and their team of consultants, attorneys and property managers. The entire “public” input, which included Nevada Farm Bureau’s testimony, opposed the proposal.

“We believe that the Main Station Farm should be kept in agricultural use and maintained for agricultural research,” Doug Busselman, Nevada Farm Bureau Executive Vice President said during his testimony, adding, “we are convinced that as a result of this zoning change we will see another example of a loss of agricultural research at the facility.”

Part of Farm Bureau’s response to the proposal took the perspective that UNR has a public mission to meet as our Land Grant University, not consistent with the for-profit land development motive which appears to be at the core of this zoning change proposal.

“As a public entity, UNR is supposed to be an educational/research organization, not a property owner with the same options and profit orientation that should be available for a private property owner,” Busselman said. “We believe public funds, including federal research dollars, have been invested in this property to be used for agricultural research that are consistent with the purpose for this property. Converting this property for commercial use is a violation, in our opinion, for the public trust associated with this property.”

The University apparently is banking on the remaining 812 acres that haven’t already been sold off or included in this zoning change proposal to serve as a combination “research” facility and mitigation tool to offset the better than 1-1 flood mitigation that developing the 104 acre tract will require under the terms of the Planning Commission’s approval. Raising the elevation of the flood-prone area to a minimum of one foot above the 100-year flood event level will also require lowering the elevation of adjacent property by a similar engineering equivalent.

Fending off criticism that the University is working at “selling off the farm” a spokesperson for the University promised that work is underway to secure a conservation easement on the remaining 812 acres of the property to keep it in agricultural use into perpetuity.

As we did in the past, the emphasis now needs to be on contacts with the Reno City Council members, who will make the final decision on whether the zoning change should be approved. Since last year’s effort, four of the seven member Council have changed. It will be essential that there is a strong response of contacts with the Reno City Council to accomplish the objective of keeping the zoning change from going forward.

The mailing address to reach the members of the Reno City Council is PO Box 1900, Reno, NV 89505. The fax number to send your messages is 775-334-2097. These are the members of the Reno City Council and their email addresses. For those who have the ability to send them emails, we consider this to be one of the more productive approaches in getting the City Council’s attention on the need to keep the UNR Main Station Farm in a zoning status which does not allow for commercial development.