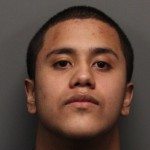 Washoe County sheriff’s detectives began working closely together with investigators from the Placer County Sheriff’s Office since the Incline Village Chevron crime was similar to an armed robbery that occurred on Saturday, Dec. 30, at 9:09 p.m. at the Kings Beach Liquor Store at 8645 N. Lake Blvd. being investigated by the Placer County Sheriff’s Office.

The third suspect, Jorge Miranda-Rivas, an 18-year-old Incline Village resident, was also located and arrested without incident.  All three suspects were charged with Robbery with a Deadly Weapon, Conspiracy to Commit Robbery, Grand Larceny of an Automobile and Conspiracy to Commit Grand Larceny of an Automobile.  Miranda-Rivas is being held at the Washoe County Sheriff’s Office Detention Facility on $82,500 bail.

The investigation is still on-going in both Washoe and Placer County.  Anyone with information regarding this armed robbery investigation is encouraged to contact a detective with the Washoe County Sheriff’s Office at 775-328-3336, Secret Witness at 775-322-4900 or www.secretwitness.com, or text the tip to 847411 (TIP 411) keyword – SW.