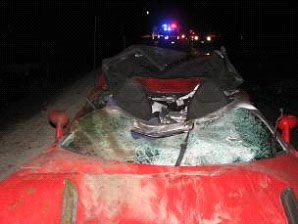 A woman’s Saturn was totaled after she hit two estray horses.

In addition, horse slaughter was not a board agenda topic and only three board members out of a total of 11 made comment on the issue. Members are appointed to state boards to bring diverse opinions to any topic, ensuring that decisions can be made by informed individuals. The NDA supports its board members’ right to voice their opinions and exercise freedom of speech.

Although the horses do not fall under protection of the Wild Free-Roaming Horses and Burros Act, the Nevada Department of Agriculture (NDA) and the State of Nevada have taken every precaution to ensure the estray/feral horses have been cared for in accordance with Nevada state law. I would like to address your suggestions for improving the program to reassure you that the NDA is taking accurate measures to manage the Virginia Range estray/feral horse population.

RESPONSE: Upon collection, the Virginia Range horses are processed and advertised. After a reasonable waiting period, they are sold per NRS 569.080 at a public livestock auction. Horses are sold to willing buyers and any member of the public may purchase the livestock. Also, no commercial slaughter houses exist in Nevada and the NDA does not transport estray horses out of the state for direct sale to a livestock slaughter facility.

RESPONSE: For the past two years, the only horses that have been trapped and transferred to the Warm Springs Correctional Center are those considered to be public safety concerns.  Public safety concerns include livestock that are in residential areas and horses in close proximity to roadways.

RESPONSE: Due to budget constraints and staff shortages, the NDA does not enter into cooperative agreements. However, previous cooperative agreements did not allow wild horse advocate groups to manage the livestock in a geographical area. According NRS 569.031 and confirmed in a recent meeting with the former director of the NDA, Don Henderson, past agreements simply arranged the placement of horses with citizens. They required a one year waiting period for ownership and quarterly inspections and reports during the year of placement. In Addition, the expenses that are incurred during the collection of horses that are a public safety are funded by the Livestock Identification fee paid for by Nevada Livestock Producers.

RESPONSE: As stated above, NRS 569.031 specifies that cooperative agreements are for the control, placement or disposition of livestock, not the management of livestock in a geographical area. Advocate groups were never allowed to move or transport horses around the Virginia range and the NDA will continue to uphold these statutes. In addition, the NDA traps and collects horses to ensure the livestock are properly handled and that the public is safe. Collection of these animals helps to prevent accidents when the animals interact with the public.

RESPONSE: NDA policies are based on the Nevada Revised Statutes and with consultation by its counsel the Office of the Attorney General.  Current practices focus on public safety as the NDA’s top priority. With that priority in mind, the department is dedicated to ensuring that our interaction with the Virginia Range horses follows state law. Correctly trapping, collecting, processing and selling the livestock helps to protect the animals and public in the Truckee Meadows area.

Thank you again for sharing your concerns with the State. Current practices are not designed to destroy the Virginia Range horse population, rather to uphold our responsibility for public safety. The NDA manages the estray/feral population in accordance with state law to protect the horses and the public with which they share the range.

No, the United States Bureau of Land Management (BLM) declared the Virginia Range as a “wild horse free area” through a land planning process in 1986. The Virginia Range horses are designated as estray/feral livestock because they are not on BLM herd management areas. Horses that have migrated or have been “let go” onto the Virginia range fall, by default, under existing Nevada state laws pertaining to estray/feral livestock.

2. Why are there so many Virginia Range estray horses?

Over the last four years, the Virginia Range estray horses have reproduced at a high rate with ample feed resources. Based on the last official count and the reproduction rate, it is possible that more than 2500 estray/feral horses roam on and around the Virginia Range.

3.    Why are people not allowed to feed the Virginia Range estray horses in the winter and during drought conditions?

It is against Nevada Revised Statute (NRS) 569.040 to feed estray/feral horses. Additionally, like any other non-domesticated animal living in the wild, if there is not sufficient forage to survive, the animal will move or perish. Despite the public’s best intentions, feeding the horses only draws them out of the range and brings them into conflict with urban areas.

4.    Are there viable birth control methods that can be used to control expanding horse populations?

5.    What exactly does “fence out” mean in the State of Nevada?

Simply put, if landowners do not want livestock on their property, they must construct a “legal fence” in accordance with NRS 569.431.

6.    When does the Nevada Department of Agriculture (NDA) trap and remove Virginia Range estray horses?

For past two years, the only horses that have been trapped and transferred to the Warm Springs Correctional Center are those considered to be public safety concerns. Public safety concerns include livestock that are in residential areas and horses in close proximity to roadways.

Four major highways border the range as well as a number of residential areas. In autumn and winter, as the forage and water diminish, estray horses come down off the range and move in search of food and water. Horses near roadways and residential areas can cause car and pedestrian accidents. By removing horses from these specific areas, the citizens and horses are less likely to be injured.

This last November, three Virginia Range horses caused a two-car accident. The collision resulted in one driver’s minor injuries, significant damage to both vehicles and the death of three horses. (See Images A and B below.)

A woman’s Saturn was totaled after she hit two estray horses. 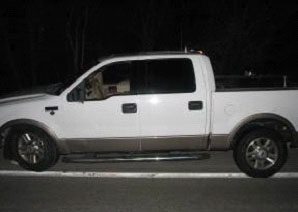 A driver damaged his truck after running over the two horses on Old US 395 South.

8.    Are my tax dollars used to collect and remove Virginia Range estray horses?

Currently, no general fund money is allocated for the management of feral or estray livestock, other than the reimbursement from the sale of the livestock.

9.    What happens to the Virginia Range estray horses collected by the NDA?

The collected horses are processed, advertised and after a reasonable waiting period, sold per NRS 569.080 at a public livestock auction. Any member of the public may purchase the livestock.

10. Will the Virginia Range estray horses go to slaughter?

It should be noted that no commercial slaughterhouses exist in Nevada nor does the NDA intend on transporting Virginia Range estray horses out of the state for direct sale to a livestock slaughter facility. Since these horses are sold to willing buyers at livestock auctions, it is possible for a livestock broker to purchase a horse and sell the same horse to another party.

11. Why does the NDA not enter into cooperative agreements?

Due to budget constraints and staff shortages, the NDA does not have staff available to manage cooperative agreements. Former cooperative agreements simply oversaw the placement of horses with citizens.  They required a one year waiting period for ownership and quarterly inspections and reports during the year of placement.  For the past two years, the NDA has sold horses directly to citizens without a waiting or inspection period.

12. Did past cooperative agreements allow advocate groups to move and transport horses around the Virginia range?

No, as stated by law (see below), cooperative agreements are for the control, placement or disposition of livestock, not the management of livestock in a geographical area.

The Department may enter into a cooperative agreement for the control, placement or disposition of the livestock with another agency of this state or with a county, city, town, township, peace officer, poundmaster or nonprofit organization. If an agreement is entered into, it must provide for:

1. The responsibility for the payment of the expenses incurred in taking up, holding, advertising and making the disposition of the estray or feral livestock, and any damages for trespass allowed pursuant to NRS 569.440;

2. The disposition of any money received from the sale of the livestock;

4. The designation of the specific geographic area of this state to which the cooperative agreement applies.