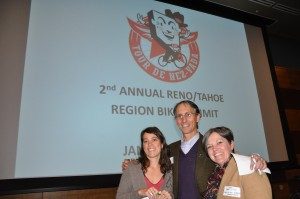 About 100 people from the Reno-area bicycling community gathered to share information about bike programs and events at the Reno/Tahoe Bike Summit Jan. 17 at the University of Nevada, Reno.

“We’ll be gathering information from all aspects of the bicycle world to create a network and forum,” Tim Helion, executive director of Tour de Nez Outreach, said in a press release. “This forwards the intent of us all to create a collective cause and voice in moving towards a bike-friendly planet.”

Among the groups to present information at the summit were the Nevada Department of Transportation, which produces a free map of rides around the state; Reno Bike Project, which offers bicycle repair classes and advocates for bicyclists; and Tahoe Area Mountain Biking Association, which works to build and improve trails.

Attendees also learned about the Tour de Nez, a bike race and event now in its 21st year. In addition to the race, Tour de Nez usually includes fun and quirky bike events such as kids’ races and the clunker classic. This year, Tour de Nez organizers are working with the Nevada Commission on Tourism to expand the race course and draw more attention to the state of Nevada. Set for July 25-28, the race will be called Tour de Nez-Vada and the course will go through Reno, Carson City, Lake Tahoe and Virginia City.

Those interested in the event can learn more on the Tour de Nez website, www.tourdenez.com. Tour de Nez Outreach also plans to provide information on all the groups that participated in the Jan. 17 summit on the website in the near future.