Various religions came together today in a tribute to Connecticut victims 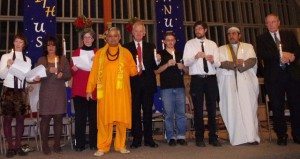 They recited prayers and read from scriptures in Arabic-Sanskrit-Hebrew-Aramaic besides English and lighted candles at Reno First Congregational Church (RFCC), paying tributes to all victims, their families, teachers, administrators, and first responders touched by this tragedy.

Organized by Hindu statesman Rajan Zed, who is Director Interfaith Relations of Nevada Clergy Association, in collaboration with RFCC Pastor Rich Smith, many in the audience were seen wiping their tears during this interfaith service. Audience accompanied well-known musician Jim Eaglesmith in his fusion rendition of “Give Peace a Chance”.

Opening the service with Gayatri Mantra, most sacred mantra of Hinduism from oldest existing scripture of the world Rig-Veda, Rajan Zed said: We want to show that Nevada faiths are united in their mourning and support for the victims, their families and others affected by this tragic loss in Connecticut.