By ThisIsReno December 3, 2012
William Paul Clark was last seen swinging from a tree branch over the Truckee River. 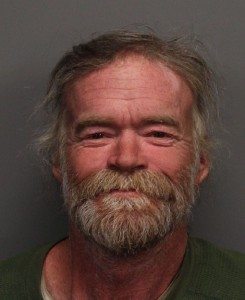 William Paul Clark was last seen swinging from a tree branch over the Truckee River.

Firefighters from the Reno Fire Department and Sparks Fire Department with the assistance of Washoe County Sheriff’s Office Hasty Team have resumed searching for a man that fell into the river last evening.

Last evening at 6:21 p.m., the Reno Fire Department responded to area of the Sutro Street Bridge on a report of a male that had fallen into the river after swinging on tree branches. The missing male is Clark, William Paul (date of birth 10-02-61). Clark is described as a white male, 5 feet 8 inches, 155 pounds, with grey hair, and brown eyes. Clark was last scene wearing a grey, brown, and blue jacket with blue pants. See attached photo.

Clark was with a friend and the friend advises Clark was climbing a tree, the tree broke, and Clark along with the tree fell into the river. The friend stated they were both homeless and typically camped together.

Today, the Reno Fire Department is re-searching the river from the Sutro Street Bridge to Fisherman’s Park, the Sparks Fire Department is search the river from Fisherman’s Park to the train trestle one mile east of Sparks, and the Washoe County Hasty Team is searching from the train trestle to Lockwood. The river search will be conducted using both swimmers and boats. The search last evening had to be discontinued due to extreme danger to rescue swimmers.

The Reno Fire Department and the Sparks Fire Department would like to remind the community of the dangers of the Truckee River during this time of year. The swift water flow can carry a person away quickly, and the temperature of the water will quickly lead to hypothermia which can incapacitate anyone who ventures into or falls into the river overcoming their swimming skills and ultimately lead to drowning. Hypothermia occurs when the body’s core temperature is dramatically lowered. Among other results, there is a loss of strength and muscular coordination as well as mental confusion and often erratic behavior.
With higher water and faster flow, the Reno and Sparks Fire Departments say there is also an increased hazard from debris that is washed into the river and, often unseen, can strike someone causing them to lose their footing in the swift water or render them unconscious.

Below are some river safety tips:

• Do not enter or allow others to enter the Truckee River during peak runoff flow periods when people can be quickly overwhelmed by the power of the river, placing themselves and rescuers in danger.

• Avoid prolonged exposure to the cold water of the river which can lead to hypothermia.

• Make sure children are under constant supervision and keep them away from the riverbank where they can easily fall into the river, or where riverbank erosion can result in the bank caving into the river.

• All pedestrians, including joggers and walkers, should stay on established pathways and trails and away from the edge of the riverbank.

• If you do fall in, do not attempt to stand up. A leg or ankle can easily become caught in underwater rocks or debris, and the force of the water can push you over and hold you under. If possible and you are able to do so, aggressively swim towards the nearest shore.

• If you see someone fall into the river, immediately call 9-1-1. DO NOT attempt a rescue by entering the water. A rope or flotation device such as an inflated toy or sports ball, or even a Styrofoam ice chest can be thrown to the victim to assist them.