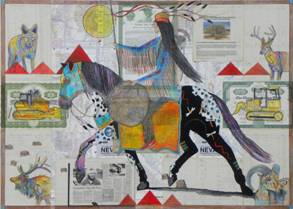 On view through March 3, 2013, The Way We Live: American Indian Art of the Great Basin and the Sierra Nevada surveys contemporary art made by American Indians in the Great Basin. The exhibition, presented in November, 2013 in celebration of Native American Heritage Month is the first significant exhibition of contemporary American Indian art in Nevada in the past two decades. The 400,000-square mile-region known as the Great Basin is the largest watershed in North America which does not drain to an ocean. This important exhibition features the work of over 20 American Indian artists from communities spanning from Idaho to the southern Sierras and from Elko, Nevada to Auburn, California. Many of the artists living and producing art in this region work independently of each other in disparate rural areas.

While there have been numerous historical exhibitions of American Indian art, basketry, and craft, and occasional small exhibitions of contemporary American Indian art in Nevada, this is the first project to encourage the creation of new art from this diverse community. The Museum issued a call for artists to submit works addressing issues relating to concepts of the changing environment. The purpose of the project is to encourage the creation of new artworks in a range of media.