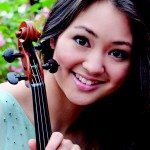 Sixteen-year-old violinist Simone Porter of Seattle, Wash. is the featured soloist for the Reno Philharmonic Orchestra’s Classix Two concert on Sunday, October 21 and Tuesday, October 23 at the Pioneer Center for the Performing Arts.

Classix Two, the second in the six-concert classical series, features the Reno Philharmonic Orchestra led by music director Laura Jackson performing White Lies for Lomax by Mason Bates,Nicolò Paganini’s Concerto No. 1 in D Major for Violin and Orchestra, op. 6, and Ludwig van Beethoven’s Symphony No. 7 in A Major, op. 92.

Featured soloist Simone Porter was named a Davidson Fellow Laureate in 2011, receiving a $50,000 scholarship from the Davidson Institute for Talent Development, a national non-profit organization based in Reno, Nevada, whose mission is to support profoundly gifted young people (DavidsonGifted.org). The Davidson Institute is underwriting Porter’s Reno performance with the Reno Philharmonic.

At the age of 10, Simone Porter, was featured on the nationally-syndicated radio program, From the Top. The following year, she made her Carnegie Hall debut on the Emmy Award-winning TV show, Live from Carnegie Hall. Since then, she has been a featured soloist with orchestras from Olympia, Washington to Hong Kong. She currently studies music at the Colburn School of Performing Arts in Los Angeles.

Before the Classix Two performance, music director and conductor Laura Jackson offers a preconcert talk that includes information about the composers, musicians and/or works the orchestra will perform. The preview is free for all ticket holders and begins on Sunday at 3 PM in the main hall (doors
open at 2:30) and Tuesday at 7 PM in the exhibition hall (doors open at 6:30) at the Pioneer Center.

All performances take place in the Pioneer Center for the Performing Arts at 100 S. Virginia St. Reno, NV 89501. Single ticket prices start at $25 plus transaction fees. Prorated subscriptions to the Classix series are available by calling the Reno Philharmonic Box Office at (775) 323-6393. Visit
RenoPhil.com for additional information or to purchase tickets online.